Just months after parting ways with the UFC, Luke Sanders has announced his retirement from MMA.

The former RFA bantamweight champion took to Instagram on Wednesday to announce the news.

“Cool Hand! Out! I’m officially retired after 8 ufc frights two performance of the night awards multiple records held in my division. And whipping everybody’s ass that was put in front of me. It’s been a great ride…thank you to all my coaches, friends, Family, and fans All this was for y’all. Many blessing, All the love guys

Sanders (13-5 MMA, 3-5 UFC) leaves the sport on a two-fight losing skid. Most recently, he dropped a unanimous decision to Felipe Colares at UFC on ESPN 23 in May. He fought out the final fight on his UFC contract against Colares and was removed from the U.S. Anti-Doping Agency (USADA) testing pool following the loss. 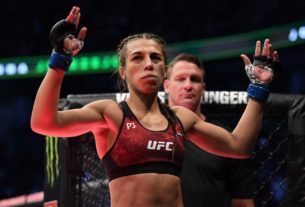 Jedrzejczyk ‘Wouldn’t Change Anything’ Ahead Of UFC Tampa