This weekend (Sat., Sept. 18, 2021), Ultimate Fighting Championship (UFC) will remain inside UFC Apex in Las Vegas, Nevada, for UFC Vegas 37. Let’s be honest with ourselves: “Fight Night” events headlined by Anthony Smith in 2021 are likely to be less than ideal. Still, looking at the match ups themselves, Saturday night’s event seemingly promises some good action inside the tiny Apex cage.

If you’re reading this, you’re like a UFC junkie who’s going to watch regardless of card quality, so let’s take a closer look at these main card donnybrooks:

Best Win for Lipski? Luana Carolina For Bohm? Griet Eeckhout
Current Streak: Lipski has lost two straight, while Bohm makes her UFC debut at 7-0
X-Factor: Potential UFC jitters for Bohm
How these two match up: This is a fairly clear striker vs. grappler battle. Admittedly, both women are certainly willing to venture into the other’s area of strength.

Lipski has struggled to find consistent success inside the Octagon, but in her defense, all of her losses come to quality contenders. Overall, she’s at her best when able to kickbox from range. Conversely, Bohm typically looks to drag her opponents to the mat, where the back take and rear-naked choke are often soon to follow.

There is little clarity available here. On one hand, Lipski’s defensive wrestling and grappling have routinely let her down at the UFC level. However, Bohm hasn’t exactly faced great competition, and thus far, Lipski has only been defeated by fairly proven fighters.

Bohm’s inexperience aside, striker vs. grappler match ups are often dictated by how well the striker is able to disengage from grappling. It seems likely to me that Lipski instead gets sucked into her opponent’s world, at which point Bohm continues her winning ways.

Best Win for Tsarukyan? Olivier Aubin-Mercier For Giagos? Damir Hadzovic
Current Streak: Tsarukyan has won three straight, while Giagos has taken his last two bouts
X-Factor: Tsarukyan did miss weight last time out
How these two match up: This is one of the best match ups of the night.

Tsarukyan has a pretty solid group of believers behind him, as many have named him the future of 155 pounds — no small feat when you consider the competition. True to form, the 24-year-old Russian has an excellent background in Freestyle wrestling as well as dynamic kickboxing and a deep gas tank.

Giagos is a hard-nosed veteran, the perfect test for such a prospect. An underrated wrestler and grappler, Giagos is crafty on the feet and knows how to win fights.

It’s really up to Giagos to do something extreme here or fight absolutely perfectly. On paper, Tsarukyan is the bigger, younger, more explosive fighter. He’s likely to win the wrestling exchanges, and the dude kicks really hard, which makes playing the outside as Giagos prefers a tricky proposition.

Giagos is a quality Lightweight, and he’ll do his best to keep the fight competitive, but I do not see a clear route to victory for him.

Best Win for Buckley? Impa Kasanganay For Arroyo? Stephen Regman
Current Streak: Buckley came up short last time out, while Arroyo is 0-2 inside the Octagon
X-Factor: Buckley’s defensive woes
How these two match up: Two Middleweights in need of a win collide.

Look, Buckley may not be the title challenger that UFC was hoping for after his legendary jumping back kick knockout, but that doesn’t mean he sucks. The 27-year-old knockout artist is a quality athlete with some good depth to his boxing, but he does have a bit of a problem being predictable with his timing.

On the flip side, Arroyo is a Muay Thai and jiu-jitsu fighter who has been given very few chances to strike or gain top position. Both of his UFC fights have seen him largely grounded on his back, so perhaps this is the match up that his skill shines through against a non-takedown artist.

It is hard to be too confident in Buckley at 185 pounds. He is, once again, facing a considerable height and reach disadvantage, as well as an opponent who will be looking to time him coming forward. Realistically, Buckley’s future should be at Welterweight if he’s to make a serious impact.

Is Arroyo really the man to punish these traits, though? He’s facing a considerable athletic disadvantage, to the point that him scoring takedowns of his own seems unlikely. Instead, he’ll be dealing with the genuinely dangerous blitzes of Buckley, who certainly hits very hard and knows to target the mid-section.

Remember that MMAmania.com will deliver LIVE round-by-round, blow-by-blow coverage of the entire UFC Vegas 37 fight card right here, starting with the ESPN+ “Prelims” matches, which are scheduled to begin at 4 p.m. ET, then the remaining main card balance on ESPN+ at 7 p.m. ET.

To check out the latest and greatest UFC Vegas 37: “Smith vs. Spann” news and notes be sure to hit up our comprehensive event archive right here. 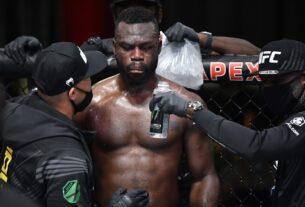