UFC Vegas 37, The Morning After: The Unlikely Improvement Of ‘Lionheart’

Here’s what you may have missed last night!

I say this without menace: like most dedicated UFC fans, I was not eagerly anticipating Anthony Smith’s latest UFC main event slot.

That’s an objectively rude sentiment, but it’s really not intended as a knock on Smith’s character or fighting ability. “Lionheart” is a very fun fighter to watch — boring fighters do not finish 33 of their opponents — and has proven himself to be a quietly intelligent competitor. Hell, I actually ran into Smith once at the UFC Performance Institute, and he was as polite as one could be.

So, the problem is not at all with Smith himself. The relative lack of interest, however, lies in the fact that we’ve done this before! Smith has been in the main event of various cards (mostly “Fight Night” events) than anyone else since 2018. Eight of his last nine bouts have been given the five-round treatment, and that’s just a lot!

Beyond the sheer volume of Smith main events, it also starts to feel like we’ve seen what Smith has to offer. We have seen Smith struggle with certain strategies, seen him forced to rely on toughness when his skills fail him. We’ve also seen the finishes, Smith making use of creative offense at his best.

Or at least, what we thought was his best. After all, fighters don’t usually keeping improving in their 52nd professional bout. Smith’s two recent wins were quality, but they were a bit easier to pick apart. Devin Clark is not comfortable under fire — a bad trait vs. a proven finisher like Smith — and Jimmy Crute was doing fairly well before a well-placed calf kick shut off his foot. Good wins, but not necessarily awe-inspiring.

Last night, Smith proved that line of thinking far too cynical. Against a genuinely dangerous prospect in Spann, Smith proved himself an entire level above. Spann came prepared, looking to counter kicks with heavy punches, but he soon learned that there was no safe position inside the cage provided “Lionheart” was locked inside too.

At distance, Smith was poking hard jabs and low kicks. When Spann did try to land his power punches, Smith was simultaneously answering with check hooks or firing back right away in combination. The fight moved to the mat, and Smith beautifully mixed his offense between opportunistic elbow strikes and aggressive submission threats.

Spann couldn’t get anything going. Damage was everywhere, and the finish circled in on him like a vulture. The whole process took just under four minutes.

After the win, Smith called for a rematch with Aleksandar Rakic, who pretty easily diffused Smith in August 2020. Right away, it’s easy to write off the rematch vs. the younger talent, who presumably still has the crushing calf kicks and controlling wrestling to recreate that uneventful win.

Smith deserves better than that negativity though. He’s shown that despite the odds, he keeps getting better, and there are still new reasons to be excited about any upcoming “Lionheart” fight. 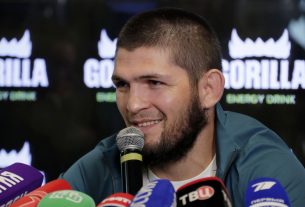