After having picked up three straight wins, heavyweight Christian Larsen was looking to add to his streak with his first bout of2021 versus Caio Machado at BFL 67 this past June, but things did not go his way.

Admittedly not prepared as well as he should have been for the bout, Larsen suffered a first round TKO loss, marking his first defeat since 2017.

“I’d been working on rigs, and Covid had shut everything down and we couldn’t train, so it was a poor time to take a fight,” Larsen told MMAWeekly.com. “I hadn’t been training. I was 325lbs when I took that fight. I had a 53lb weight cut to make weight. And when you’re fight at that level you can’t just walk in.

“I’m not taking anything away from (Machado). He had a good fight. He executed his game plan well. He hit me with a good counter left. He did his job. But in hindsight I should have gone into that fight with a full camp.”

Since the bout with Machado, Larsen has been able to get back to the business of being a fighter more consistently, and feels like that will show the next time he steps into the cage.

“Things have been open up here in Alberta since the summer… so been building off the last camp still,” said Larsen. “The conditioning is better, the movement is better; everything is coming back; so I’m doing a lot better walking into this (upcoming) fight.”

On September 24 in Edmonton, Alberta, Canada, Larsen (5-2) will look to rebound in a bout that was supposed to have taken place pre-Covid when he faces Grayson Wells (5-3) in the heavyweight championship co-main event of Unified MMA 41.

“He’s a dangerous striker,” Larsen said of Wells. “He’s versatile. He likes to get in there and throw. So I think in order to win I’ve got to keep my defensive game about me, and just pick my shots and I should be able to finish things fairly early.

“With Covid honestly I think it’s pretty much the same fight (it would have been before). We’ve all been in kind of a holding pattern, trying to get in workouts when we can with all the conditions. Conditions here in Canada have been pretty strict throughout. I think it’s the same fight.”

When it comes to the remainder of his 2021, Larsen is open to the possibility of an additional fight, but more importantly he wants to start making headway towards taking the next step in his career no matter what opportunities may present themselves.

“The conversations I was having with some of the larger promotions were kind of put on hold here after my loss. I need to get another win, maybe two wins under my belt, before we can start those conversations again,” said Larsen.

“I would expect to fight after Christmas unless the opportunity presents itself to fight again with someone else before then.” 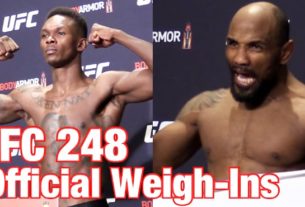