Skip to content
Lauren Murphy recognizes how good Valentina Shevchenko is, but ‘everybody has weaknesses’

LAS VEGAS – Lauren Murphy is soaking it up and living in the moment.

Ahead of what might seem to some, including herself, an improbable title shot, Murphy (15-4 MMA, 7-4 UFC) isn’t getting ahead of herself. But that doesn’t mean she’s not enjoying the lead-up to her first title opportunity at UFC 266, either.

“I feel in awe that I’ve gotten to spend a great part of my adult life being a professional athlete,” Murphy told MMA Junkie at a pre-fight news conference Wednesday. “It’s not something I would’ve ever planned for myself. Honestly, when I wake up in the morning, I’m like, ‘Man, if my life had turned out the way I would’ve picked it for myself, I would’ve sold myself short a thousand times over. This is better than anything I could’ve come up with for myself. I love this.”

Entering the fight, the oddsmakers are heavily counting Murphy out. According to Best Fight Odds, she’s an 8-to-1 underdog across major online sportsbooks. Although she knows champion Valentina Shevchenko (21-3 MMA, 10-2 UFC) won’t be an easy task, Murphy is confident that she can play to her own strengths – and the champion’s weaknesses, regardless of how few and far between they may be.

“Nobody’s perfect, but she is a well-rounded fighter,” Murphy said. “You don’t get to be a dominant champion by having holes in your game. When I watch her fight, it’s not like she has these big, glaring weaknesses that I’m like, ‘Oh, yeah. I could take advantage of that, for sure.’ I think those days are over. You don’t get to be where she’s at by not being well-rounded and not being really, really damn good at everything, but everybody is human. Everybody has habits and things that are exploitable. Everybody has weaknesses. Anybody who thinks they don’t have a weakness, that in itself is a great weakness. Everybody makes mistakes.”

“At this level, that’s what we’re looking at. What habits does she have? What areas can we take this fight where I feel the most comfortable? How are we going to accomplish that? What sequences do I want to accomplish in this fight?”

Murphy, 38, rides a five-fight winning streak and has not lost since August 2019. Although she is a former Invicta FC bantamweight champion, Saturday’s fight will be the first UFC title opportunity for Murphy.

Meanwhile, Shevchenko has only lost to one fighter: current UFC women’s featherweight and bantamweight champion Amanda Nunes. At flyweight, however, Shevchenko is undefeated including five title defenses.

Lauren Murphy recognizes how good Valentina Shevchenko is, but ‘everybody has weaknesses’ 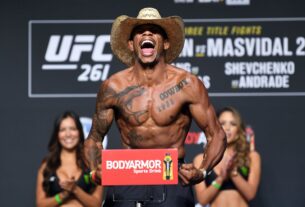 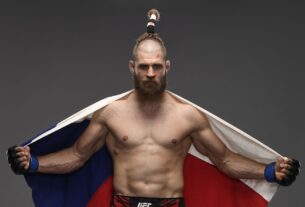 Prochazka On Spinning Elbow KO Of Reyes: ‘That Was Just The Flow’