COVID-19 has taken another hit to a UFC card, this time affecting the previously scheduled Oct. 16 main event featuring former bantamweight champion, Miesha Tate and Ketlen Vieira. The news came via Sherdog who announced that Tate had tested positive for the virus.

Tate was looking to keep the momentum going after returning from a 2016 retirement. She re-entered the Octagon in July where she defeated Marion Reneau via a third-round TKO.

Neither fighter has confirmed the news via their social media at press time.

The bout will be postponed, rather than a new opponent found for Vieira.

There are currently only a few bouts announced for this card and the UFC has not announced a new main event.

Confirmed to fight on Oct. 16 so far are:

Miranda Maverick on Maycee Barber fight judges: ‘I don’t know what they were watching’ 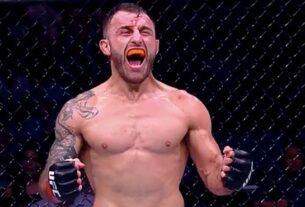