Curtis Blaydes and Jairzinho Rozenstruik faced off in a Heavyweight clash tonight (Sat., Sept. 25, 2021) at UFC 266 from inside T-Mobile Arena in Las Vegas, Nevada. Thanks to some timely takedowns, Blaydes returned to the win column.

Blaydes began the fight light on his feet, but Rozenstruik struck first, scoring on a couple big swings. Blaydes scored with a long jab. Not long afterward, Blaydes changed levels and landed a trip along the fence. From side control, Blaydes started getting to work with elbow and hard knees to the side. Rozenstruik tried to shimmy up along the fence, but Blaydes stayed heavy from top position and continued to work. Rozenstruik returned to his feet and separated with two minutes remaining in the round.

Blaydes went back to the jab, looking good at distance after all the wrestling. Rozenstruik, alternatively, looked a bit hesitant. The straight shots were landing really well for Blaydes, who controlled the exchanges until the end of the round to cement a strong opening five minutes.

Rozenstruik opened the second with a clean check hook. Blaydes answered with feints and that long jab. The pace slowed a bit, and Rozenstruik denied a takedown. Double jab scored for Blaydes. Blaydes was the more active man, but not a whole lot was happening until about the 90-second mark. Then, Rozenstruik exploded into a solid jump knee right to the jaw, but Blaydes reacted with a takedown into half guard. Blaydes landed a couple short elbows, mostly controlling his foe to the bell.

With five minutes remaining, Blaydes’ eye was swelling shut, but Rozenstruik needed a finish. Despite the situation, there was little urgency from the kickboxing. Blaydes connected on a couple nice punches. Blaydes chopped the lead leg then drove through a powerful double leg takedown. Blaydes moved into half guard. From that position, Blaydes chipped away with short shots and controlled his opponent. Blaydes couldn’t escape, and he was stuck there until the end.

Was it a beautiful performance? No. Still, Blaydes absorbed relatively few strikes against one of the division’s better kickboxers, and he pitched a shutout on the scorecards. It won’t get anyone too excited, but Blaydes remains one of Heavyweight’s best. 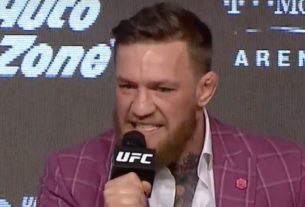 Conor McGregor continues to press Ireland to close all its ports 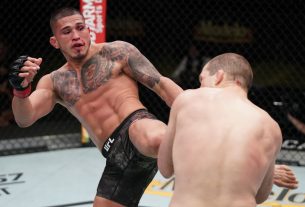 Pettis Headed Back To 155, But Will It Be With UFC?