Conor McGregor has turned in his review for Nick Diaz’s performance against Robbie Lawler at UFC 266, and the Irishman was very complimentary of the Stockton legend.

At UFC 266, Nick Diaz made his return to competition for the first time in six years when he took on Robbie Lawler in what was dubbed by many to be the “people’s main event.” Lawler got his retribution for the loss suffered to 17 years ago when he became the first man to defeat Diaz by a non-doctor’s stoppage since 2002.

Diaz’s performance has been met with some mixed reviews, but there was one person who was a fan of the technique the elder Diaz brother put on display. And it’s someone who knows a thing or two about striking: MMA megastar Conor McGregor.

Here’s what McGregor had to say about Diaz’s performance via Twitter on Sunday.

“Nick/Rob was a good fight. The spin kick at the start gave the ground on Nick but he was veteran composed and was peppering lovely shots in. He just ate some big body shots and there was more coming Robbie was strong to the body it was veteran work all round. I enjoyed thoroughly”

“The finishing sequence when the temple was clipped after the leg went, the evasion of the final shot, which was a blistering uppercut, was magic. Look at it. Down on one knee, observing where the shot was coming from, slip/parry, and re cente to open guard safe. Ala Daly fight.”

McGregor would then turn his attention to the younger Diaz brother and longtime rival Nate Diaz, whom the Irishman was much less complimentary of.

“Nate your boxing is piss compare to nicks. We been fed garbage with your sloppy shots the last few years. Can see the clear difference between the two brothers after last night. Balance, composure. Another level the big bro is on to you. I made you.”

Rarely if ever does a McGregor shot at Nate Diaz go unanswered, so we will keep you posted if and when Nate delivers a countershot to his nemesis.

Do you agree with Conor McGregor’s assessment of Nick Diaz’s UFC 266 performance? 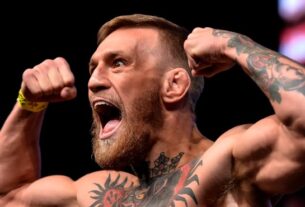