The Cage Warriors’ bantamweight division has a new champion.

In the main event of Cage Warriors 127, Dominique Wooding picked up a huge victory over Nathan Fletcher, by finishing the fight in the third round via knockout to claim the vacated title. The fight came together after former champion Jack Cartwright vacated his title and left the promotion.

Cage Warriors 127 took place Sept. 30 at York Hall in London. It was the first of three straight events in the promotion’s latest “trilogy” format. The card streamed on UFC Fight Pass.

Wooding (8-4) entered Thursday’s contest fresh off a first-round finish of Cameron Hardy by head kick followed up by punches. Against Fletcher (6-1), he used his legs again to lead to the finish, although he faced much more adversity before securing the finish.

Fletcher had success early in the fight, controlling Wooding in the clinch. Leaning on his grappling, Fletcher neutralized Wooding’s striking by bringing him to the canvas in the first round, where he would look to land strikes and hunt for submissions.

Can’t tell for sure… but it sure looks like a bad spot to be in.#CW127 pic.twitter.com/5exrRf83Zo

Fletcher continued the same gameplan in the second round as well, but Wooding maintained his composure throughout the tough situations with his opponent dominating the grappling aspect of the fight.

In the third round, Wooding was able to stuff takedowns early. Fletcher eventually got him down, but he was able to work back to his feet and keep space long enough to land a well-timed knee as Fletcher shot for another takedown. From that moment, Wooding knew a finish was near and poured on the strikes until the fight was stopped.

INCREDIBLE! WE HAVE A NEW CHAMPION!

In his second stoppage victory in a row, Wooding became the new Cage Warriors bantamweight champion on night one of three events for the promotion.

The full results of Cage Warriors 127 include:

Bellator 267 main event breakdown: Can Michael Page get one back on Douglas Lima? 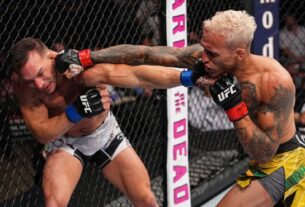