Top-ranked middleweight Derek Brunson says he had less-than-ideal training partners in the lead-up to the highly publicized fight between Israel Adesanya.

The two middleweights met in 2018. At the time, Brunson was proven in the UFC with plenty of first-round stoppages. However, Adesanya perhaps caught the middleweight at the best time as he was a little over ten months removed from being knocked out by Ronaldo Souza for the second time.

The #4-ranked Derek Brunson illuminated some of the problems he had during his first camp with Adesanya. For starters, the 185-pound middleweight claims he did not exactly have high-level training partners.

“I was training with soccer dads, firemen, police officers, janitors,” Brunson told The MMA Hour. “Like, that was who my training partners were. One UFC fight, I had a homeless guy I was training with. He used to be like an amateur boxer — a homeless guy. I tried to go find him after my fight and give him money, but I couldn’t find him. Nobody could find him.”

Apparently, Brunson moved on from those training partners, and the transition seems to have paid off. The 37-year-old started training with Sanford MMA, and the results speak for themselves.

Fast forward to 2021, and “Blonde Brunson” remains undefeated. The American has won his last three bouts and two by way of finish (1 submission and 1 TKO). It is hard to deny the results of Brunson’s handiwork as of late. With back-to-back wins against Kevin Holland and Darren Till, Brunson’s dominating pace and wrestling pressure have kept him busy at the top of 185-pounds.

As the showdown between Brunson and Jared Cannonier looms over UFC 270 in January, the results will certainly give way to a new contender ready to challenge for the middleweight throne.

Anatomy of a Fighter: Behind the scenes with ONE on TNT 1’s Eddie Alvarez 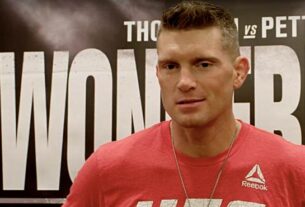