Colorado is breaking ground and adopting open scoring in the sport of boxing and mixed martial arts.

The Colorado State Boxing Commission (CSBC) voted Tuesday to implement new rules and regulations for combat sports. According to director Tony Cummings, Kansas is the only other state that is currently operating with the approved legislation. The Sunflower State has been practicing the measure since Feb. of 2020.

Open scoring allows everyone from fighters, coaches, and fans the ability to know how the judges are assessing the fights in real time. After every round, scoring tabulations will be made public to anyone who wants to see them. The news is particularly intriguing since fighters will now know if they are winning or losing their fight on the judge’s scorecards.

Director Cummings explains that the open scoring rule is optional for promoters. In accordance with the new plan, CSBC believes the new legislation is about illustrating transparency in scoring.

“I just look at it as doing something that’s needed for the sports,” Cummings said to ESPN when asked about the state’s changing regulations. “That’s how I look at every rule and policy that we adopt. Does it benefit the fighters? And if it does — from a safety perspective or transparency perspective — we’ll look at it. That’s my opinion on it.”

Open scoring is not currently part of the Unified Rules of MMA, as they are overseen by the Association of Boxing Commissions and Combative Sports (ABC). Although, under ABC’s current system, states are allowed to adopt the rules as they see fit in their respective capacities.

When asked about the recent rule change, Cummings doubled down that promotions should be left to make their own decisions.

Colorado has been highly active with rule alterations. Recently, Colorado approved a similar ruleset to ONE Championship’s. The CSBC voted to utilize the ruleset of Asia’s premier MMA promotion, where fighters may knee a downed opponent. Similar to open scoring, Cummings said that the implementation of the practice would be optional for promotions.

What do you make of the recent advancement of open scoring in Colorado? 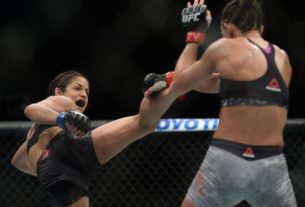 Video: Nick Diaz (allegedly) is serious this time about UFC return. Who should he fight?