UFC fighter Luis Pena is one of three fighters arrested in less than 30 days on domestic violence charges and now details of the arrest have been revealed.

According to ESPN who spoke with a Broward County Sheriff’s Office spokesperson, Pena was arrested on Saturday for allegedly striking his girlfriend and another woman and has been charged with two battery counts.

Both charges are misdemeanors and he’s being held on $6,000 bond.

According to an affidavit obtained by ESPN, Pena allegedly struck his girlfriend in the face multiple times, including while she was on the ground.

A second woman was struck in the face and fell to the ground when she attempted to intervene.

Both women spoke to police and had photos taken but their names were kept private by law enforcement.

The incident occurred sometime around midnight on Saturday.

The UFC has not commented on the incident but Pena’s attorney, Daniel Martinez, said, “it is premature to make any statements on behalf of my client, so I respectfully decline to comment at this time.”

What’s next for Demian Maia and Ben Askren after UFC Singapore? 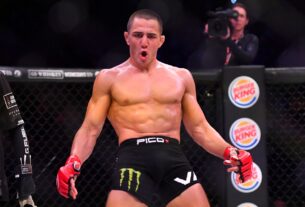 Pico vs Lee Rescheduled For Bellator 260