I guess the roster was full at Eagle Fighting Championship.

Saygid Izagakhmaev is one of the top 170-pound prospects on the international fight scene, but the Dagestani grappler won’t be joining his Eagles MMA stablemates in UFC. Instead, the 19-2 welterweight will make his ONE Championship debut in December.

“I want to share news with you guys, my brother Saygid Izagakhmaev has signed a contract with ONE Championship and his next fight will be in December,” Nurmagomedov wrote on Twitter. “Thank you so much Chatri Sityodtong, it would be impossible without you, see you my friend, it was nice to meet you.”

An opponent has yet to be revealed.

ONE is expected to stage two events in December, so it’s not yet known when and where Izagakhmaev, 27, will make his in-cage debut. First up is “ONE X” on Dec. 5, followed by “Winter Warriors” on Dec. 17 — and both cards currently have room to grow. 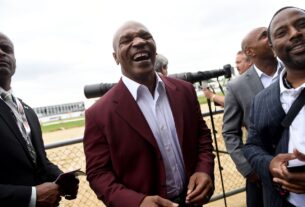 Darren Till wanted to change Neil Diamond ‘Sweet Caroline’ walkout for UFC 244, but glad he forgot