Skip to content
Andrei Arlovski brushes off pre-fight banter: I’m going to give Carlos Felipe a lesson – or I might lose

LAS VEGAS – Andrei Arlovski is quite aware of the multiple challenges issued by his upcoming opponent, Carlos Felipe. But 22 years into his professional fighting career, you’ll understand if none of it really mattered to him.

At 42, Arlovski is quite used to the situation he finds himself in once again – a younger, hungry opponent looking to make his name off a grizzled veteran and former champ. If it takes a few harsh words for the youngster to get the matchup, so be it.

“You said I’m a veteran, right?” Arlovski asked. “I don’t care anymore. I’m not 25, unfortunately, and I don’t care who’s coming out and what language, how professional or not. Just I know I did a great camp. My coaches did their homework, and I’m ready for the fight. I’m going to give him a lesson inside the octagon. That’s it – or I might lose a fight.

“You know, it’s the heavyweight division, and everybody says it: You can win the whole fight, but one punch can decide everything, so if I’m going to stick with my gameplan, keep my hands up, everything is going to be OK.”

Incredibly, Arlovski makes his 36th walk to the octagon at Saturday’s event, which qualifies him as third most in promotional history, only behind stalwarts Donald Cerrone and Jim Miller. Arlovski admits tenure records don’t really hold all that much significance to him, but he also believes that number could get much higher before he’s ready to walk away.

“I just found out that I believe I’m the third person who has the most fights in UFC history,” Arlovski said. “Listen, I’m still young. I have a lot of years to go.”

How those years play out will certainly be influenced by the results Arlovski is able to secure in the cage. At 3-1 in his past four fights, things seem to be going well enough, but Arlovski says he has designs on bigger things than just scrapping with the next young buck to call his name.

“I need to rebuild my career,” Arlovski said. “Remember all my last four opponents, they were newcomers. I want to fight someone in the top 10, top five.”

It’s been more than 15 years since Arlovski last competed in a UFC title fight. He’s had more than double the number of total career fights since losing the title than he had when he was reigning champion. Yet here he is, once again in a featured contest against a man who looks to use him as a stepping stone.

Arlovski knows it’s a path he can’t walk forever, but he certainly doesn’t see the end coming at the hands of Felipe.

To see the full interview with Arlovski, check out the video above.

Andrei Arlovski brushes off pre-fight banter: I’m going to give Carlos Felipe a lesson – or I might lose 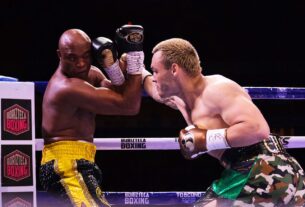