After a near-seven-year hiatus following his five-round clash with Anderson Silva at UFC 183, Diaz entered the Octagon again at last month’s pay-per-view. In a rematch over 17 years in the making, the Stockton native faced former UFC Welterweight Champion Lawler. Despite being winless since 2011, many expected Diaz to record a second career victory over “Ruthless.” He knocked Lawler out in the second round when they first met at UFC 47 in 2004.

A late request from the Diaz camp to change the bout from 170 to 185 pounds was an early sign that he perhaps wasn’t in the condition that many had hoped. Despite showing glimpses of his former entertaining self, and throwing at an immense volume considering his lengthy layoff, the time away and the strikes he’d absorbed in the opening two frames caught up with Diaz in the third round. Less than a minute into it, the 38-year-old was sent to the canvas by a hard shot. After choosing to remain on his knee, the fight was waved off and Lawler evened the score.

Part of the talk after the fight surrounded Diaz’s decision to put an end to the fight by not returning to his feet. In what was considered to be uncharacteristic of a personality like the Stockton star, many were surprised to see the veteran throw in the towel.

During an interview with Combat Sports on Fanatics View, ONE Championship’s Demetrious Johnson gave his take on the fight ending sequence. Similar to the likes of UFC Hall of Famer Michael Bisping, “Mighty Mouse” praised Diaz for recognizing when his time was up, and said he has total respect for his decision to act on it.

“Yeah, I think as you get older, you realize there’s just some things where you’re like, ‘Alright.’ I felt like when he took a knee, I was like, ‘Yeah, he’s had enough.’ Like, he had enough of what was going on. I don’t know if he broke his nose, but he got hit really hard in his nose. I think he was like, ‘I’m good. I don’t need to do this right now.’ And I totally respect him. A lot of people might look at him different, but hey, that’s what’s up. I’m happy that he was like, ‘You know, I’m good. I’m just gonna chill, and it is what it is.’”

When asked whether Diaz set a precedent that more competitors should follow, Johnson suggested he’d like to see more fighters save themselves from unnecessary damage.

“It could be. Yeah, why not? I mean, if a fighter said, ‘Hey, I’m getting beat, my orbital bone’s broken, my right hand’s broken, I got massive cuts—whatever it may be, the start of the fifth round, I’m absolutely exhausted. I don’t feel I’m gonna knock him out. I’m just gonna call it, and throw in the towel, and save my brain for another day.’ I have no problem with that. I feel like that’s a logical answer. A lot of people might say, ‘Oh, he’s a pussy. He’s a bitch, da-da-da-da,’ but for me, I’m a grown man. I have children. I understand it.”

Do you agree with Demetrious Johnson? Should more fighters throw in the towel to avoid further damage?

Sean Shelby’s Shoes: What’s next for Dominick Reyes and UFC on ESPN 6’s other key winners? 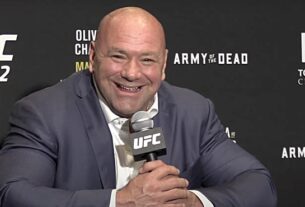