Skip to content
DWCS 43 winner Jake Hadley on issue with UFC staff: ‘If I’ve upset anyone, I haven’t meant it’

LAS VEGAS – Jake Hadley thinks cultural differences are what led to the UFC staff being upset with his behavior.

According to UFC president Dana White, Hadley (8-0) wasn’t very friendly and didn’t leave the best impression on everyone, including the matchmakers, who weren’t keen on signing him after he submitted Mitch Raposo at Dana White’s Contender Series 43 on Tuesday.

But despite Hadley’s alleged unprofessionalism and weight miss, White decided to award him a UFC deal anyway. Speaking to the media after his win, an emotional Hadley seemed rather perplexed at what he could have possibly said to cause such a frenzy behind the scenes and thinks he was likely misunderstood due to being British.

“To be honest, I don’t know what I’ve said to someone to upset them,” Hadley said during the DWCS 43 post-fight news conference. “But I want to straight out say, if I’ve upset anyone, I haven’t meant it. It didn’t come from a malicious way. That’s not my nature. That’s not me as a person. I’m not nasty in a malicious way, so I just feel like maybe it’s like a misinterpretation because of me being – like with Bisping, people don’t understand Bisping because he’s British.

“Even when I was at Whole Foods, I was like to someone, ‘You all right, mate?’ And then he was like, ‘Yeah I’m all right. Are you alright?’ I don’t think he understood what I was saying. I don’t really know what I’ve said and done to anyone. Next time I’m just gonna keep my mouth closed, I ain’t even gonna say anything, so I don’t upset no one because obviously, I don’t want something like that hindering what I’ve been working for my whole entire life. Straight up, sorry to anyone I’ve upset. I didn’t mean it from a malicious way.”

Hadley’s road to the UFC didn’t come without some drama, but the 25-year-old former Cage Warriors champion is ready to take the flyweight division by storm.


DWCS 43 winner Jake Hadley on issue with UFC staff: ‘If I’ve upset anyone, I haven’t meant it’ 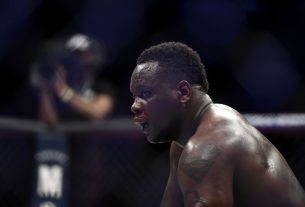 OSP ‘Upset’ After Not Getting Paid For Recent COVID-19 Withdrawal