For the first time, UFC Hall of Famer Jon Jones has addressed the events that occurred in Las Vegas that led to his arrest.

On Wednesday, the former UFC light heavyweight champion took to social media to give his account of what unfolded in Las Vegas shortly after his induction into the UFC Hall of Fame. Jones claims he never struck his fiancee, Jessie Moses, despite the police report from the incident stating she was bloodied and “scared to even talk about Jonathan.”

“I love how people are imagining the worst possible situation in their heads and making it somehow factual. I never hit my fiance and our daughters were woken up after our confrontation. My daughters didn’t see or hear us arguing.”

Jones’ tweet is the first public statement directly addressing the events that took place at Caesars Palace in Las Vegas on Sept. 24. That evening, an alleged physical altercation took place between Jones and his finacee, which led to his arrest on charges of misdemeanor battery domestic violence and felony injuring and tampering with a vehicle.

“That’s really the only thing I care to clarify..outside of that, looking forward to moving forward without alcohol. It’s the first time in my life where I’m actually ready to quit. Glad to have the support of my fiance, family friends and fans.”

Jones, 34, has yet to apologize for his role in the events that took place in Las Vegas. The first social media post from the former champion following his arrest was a video on Instagram, that has since been deleted, of him kissing his fiancee in a car. He also posted a video of himself lifting weights with multiple text captions overlayed, including a vow to leave alcohol behind.

Wednesday’s statements from Jones came a few hours after his coach Mike Winkeljohn’s appearance on “The MMA Hour,” where Winkeljohn announced the former champ was banned from Jackson Wink MMA until he could prove he has sorted out his problems. Jones has been training at the gym in Albuquerque, N.M. since 2009.

Photos: Jon Jones through the years 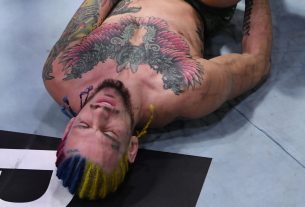 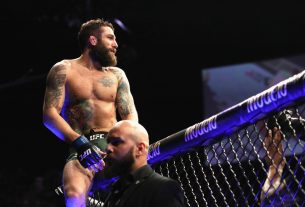