11 days out from the event, COVID-19 has disrupted a UFC Vegas 44 bout. Longtime UFC Welterweight Matt Brown revealed earlier today on Twitter that he tested positive for COVID-19, forcing him to withdraw from his planned battle vs. Bryan Barberena.

I was sick af over the weekend but feel better for the most part now. Lost smell today. Did a jog outside today and lungs burned some I thought maybe it was just the cold air but maybe I’m still sick. I’ll get over it quickly and go from there

“S—ty day,” Brown tweeted. “Today I tested positive for covid so my fight next weekend is off.

“I was sick af over the weekend but feel better for the most part now,” Brown continued. “Lost smell today. Did a jog outside today and lungs burned some I thought maybe it was just the cold air but maybe I’m still sick. I’ll get over it quickly and go from there.”

A product of The Ultimate Fighter (TUF), Brown has been a member of the UFC roster since 2008. From 2012-2014, Brown went on the best win streak of his career, culminating in an unsuccessful title eliminator bout vs. Robbie Lawler. As of late, Brown has won three of his last five, most recently stopping Dhiego Lima via second-round knockout.

Barberena, meanwhile, joined the roster in 2014. “Bam Bam” has struggled lately, having lost three of his last four. At the moment, it remains to be seen if UFC finds a new opponent for Barberena or simply delays the Brown bout to a later date.

Tanner Boser became a legend well before any UFC success.

This meme has been floating around MMA pages for years. I’m the guy on the left. [Thread] pic.twitter.com/5ncfrDZKSG

Someone then found this picture a few years later in the UFC Fan Expo picture archives or some shit and made it into a meme. I get why, but I wonder where the creator of this meme is. Own up to it coward! What have you done?

Dustin Poirier has shown nothing but respect towards Charles Oliveira’s skill and toughness, unlike many other top Lightweight contenders.

These two throwbacks are very different, but both deserve to be here.

Here’s one from the archives.

Ben Askren got all rambunctious on social media earlier, angling for an (extremely unlikely to happen) fight vs. Nate Diaz.

Nate is right, I suck at boxing. He sucks at MMA. If he wants me to prove it I can be in the USADA pool tomorrow. Would be happy to be the last fight on his contract.

Speaking of Nathan Diaz, Tony Ferguson is also looking for that fight.

You Rollin’ That Shit Or Am I? Don’t Be Scared Homie Take The Fight @NateDiaz209 # Blazin’ Trails @ufc @danawhite Make It Happen # ThePeoplesChamp One. 2022 # Road2Gold pic.twitter.com/BVX0KASYx0

Movsar Evloev wants to welcome Dan Hooker back to the Featherweight division.

Welcome! If you still want to prove that you can grapple, I’m here to bash you @danthehangman https://t.co/MGwXJZ7ic1

An update on Adrian Yanez’s jacked up ear:

So much blood later… and still gotta drain more. pic.twitter.com/6eU0YUvmqK

Nice use of the gift wrap position before the aggressive armbar attempt:

Former One Championship strap-hanger Jonathan Haggerty picked up another title over the weekend.

The most brutal pin in recent memory:

Another one of those funky, EXTREMELY RANDOM UFC edits.

Midnight Music: My climbing buddy introduced me to indie group The Technicolors today, and they have a pretty cool sound. 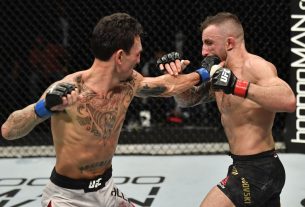 Michael Chandler reveals “every single one of them in the top-five, besides Conor” turned him down