Former UFC fighter, Anthony Rocco Martin, made headlines on Wednesday after news of his Las Vegas arrest was reported.

According to MMA Fighting, who obtained the official police reports, Martin was arrested for “one count each of battery and lewd/dissolute conduct in a public place” for allegedly punching a security guard who was following up on a report of him “urinating in a hallway at Caesars Palace.”

The incident allegedly happened on Saturday around 1 a.m. Hotel security approached Martin at 12:45 a.m after a hotel patron saw him urinating, he refused to leave the casino and refused to show identification and “began getting very irate,” according to the outlet.

Martin hasn’t fought since his 2020 loss to Neil Magny. He made his UFC debut on February 1, 2014, and would go on to fight a total of 15 times and holds wins over Johnny Case, Jake Matthews, and Ramazan Emeev, among others. 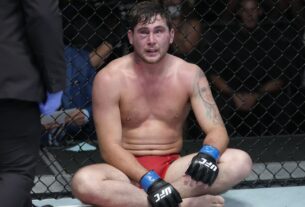 Till Responds To Loss With Pics Of Bisping, Oliveira