According to Tommy Fury’s camp, Jake Paul will not be tested ahead of their upcoming boxing match – and it was of his own volition.

John Fury, the brashly outspoken father of Tommy Fury and heavyweight boxing champion Tyson Fury, claimed in a recent interview with Rob Moore that the YouTuber-turned-boxer Paul refused VADA testing be added as a stipulation into their pre-fight requirements – despite all of the other unusual clauses.

“And like everything else, he wouldn’t sign up for the VADA testing either. That bothered me a little bit because I want that in the contract. But he wouldn’t do that. But I’m not even bothered about that because what they’re going to do, they’re going to do anyway. So yeah, we just want the fight because we know we can win it. The people that think Tommy is getting paid to lose, they’re joking.”

While it’s unclear if Paul was tested ahead of his bouts against Ali Enson Gib and Ben Askren, he was prior to his most recent fight against Tyron Woodley, MMA Junkie confirmed with an Ohio State Athletic Commission official in August.

Paul (4-0) will take on fellow undefeated professional Fury (7-0) at a weight of 192 pounds. The eight-round fight will take place Dec. 18 at Amelie Arena in Tampa, Fla., and air on Showtime pay-per-view. 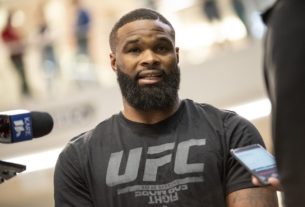