Skip to content
Jamahal Hill confident he has best hands in the UFC: There’s nobody that I haven’t been able to touch at will

When debating the best boxer in the UFC, Jamahal Hill wants his name thrown in the hat.

Hill’s lone loss came in his last outing when he dislocated his arm against Paul Craig at UFC 263 in what was deemed a TKO loss. Hill (8-1 MMA, 2-1 UFC) was caught in a triangle armbar and fought hard to get out, but Craig would not let go. His arm was dislocated and Craig kept raining strikes until the referee intervened and stopped the fight.

Prior to that, “Sweet Dreams” was able to live up to his nickname when he sparked Ovince Saint Preux and he has no doubt that he can stand and trade with anyone in the sport.

“That’s across the board,” Hill told MMA Junkie Radio on being the best boxer. “I’ve seen everybody and it’s just what I do, the work I put in, and the things that I know I’m able to do. There are guys that I’m impressed by, there are guys that I learn from. I’m also willing to adapt, I’m also willing to switch things up, change things up. I can change my game up in many different ways, especially when it comes to throwing hands. There’s never been anybody that I haven’t been able to touch at will and there’s never been anybody that just lit me up. I’ve never been lit up before.”

Hill’s confidence hasn’t wavered after suffering his first career defeat. The 30-year-old is looking to pick up right where he left off when he faces Jimmy Crute (12-2 MMA, 4-2 UFC) at UFC on ESPN 31 on Dec. 4.

“I think a win here just puts me right back on track,” Hill said. “Right back to where we were before the last result and COVID and everything else that came along with this year. Just get back on track, get back to winning ways and just keep building.”

He continued, “Hopefully me headlining some of these pay-per-views. Bigger bag, bigger check. I’m trying to get up there. I’m just outside the top 10. A win over Jimmy Crute, I’m probably knocking inside the top 10 and just build from there. Everything is going to come, we just gotta stay focused on what we got, what we can control, and that’s winning and dominating.”

Check out the full interview with Hill in the video below.

Jamahal Hill confident he has best hands in the UFC: There’s nobody that I haven’t been able to touch at will

Giga Chikadze says he will “knock Cub Swanson out cold,” confident he will be featherweight champ by early 2022 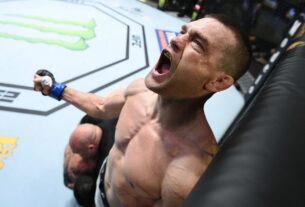 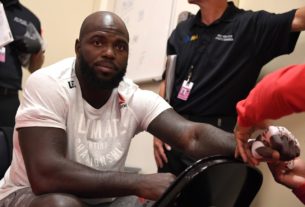