According to UFC welterweight champion Kamaru Usman, he went into his most recent fight compromised.

Usman (19-1 MMA, 14-0 UFC) revealed he broke his right hand three weeks prior to his rematch with Colby Covington at UFC 268 earlier this month, which he won by unanimous decision.

Though Usman didn’t show any signs of his hand being affected when he knocked Covington down twice in Round 2, the champion says the injury happened during a sparring session with UFC lightweight contender and teammate Justin Gaethje, just a couple of weeks out of the fight.

He continued, “I broke it on someone’s head, Justin Gaethje’s head.”

It’s not the first time Usman enters a fight with a pre-existing injury. Prior to his first fight with Jorge Masvidal at UFC 251 in July 2020, Usman claimed he broke his nose two weeks before he made the walk. He also won that fight by unanimous decision.

Usman has been dominant throughout his championship reign, notching five successful title defenses. Already holding wins over four of the top six ranked contenders, the 34-year-old has expressed interest in challenging himself against boxing champion Canelo Alvarez, but he still has streaking contenders such as Leon Edwards, Vicente Luque and rising star Khamzat Chimaev eyeing his throne.

Jake Paul sends a warning to Nate Diaz: “I’m going to Stockton slap the sh*t out of that bitch” 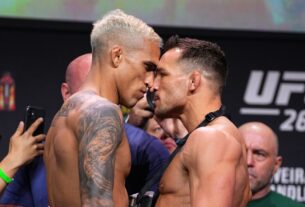 Face Off! ‘Do Bronx’ Stares Down Chandler in Houston