Aleksei Oleinik out of UFC 270; Serghei Spivac steps in to fight Greg Hardy

Vaunted submission master Aleksei Oleinik (59-15-1 MMA, 8-6 UFC) has been forced to withdraw from next week’s UFC 270 event, but a replacement has already been secured.

MMA Junkie learned Thursday from two people with knowledge of the booking who that Serghei Spivac (13-3 MMA, 4-3 UFC) has agreed to step in on short notice and will now face Greg Hardy (7-4 MMA, 4-4 UFC) at the event. The two people requested anonymity because the promotion has yet to make an official announcement.

Meanwhile, Hardy, a controversial former NFL standout, has suffered knockout losses against Tai Tuivasa and Marcin Tybura in his past two outings. The setbacks come after Hardy has earned consecutive wins over Maurice Greene and Yorgan de Castro.

With the change to the lineup, UFC 270 now includes:

Aleksei Oleinik out of UFC 270; Serghei Spivac steps in to fight Greg Hardy 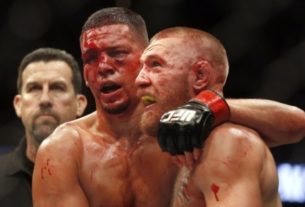