Fighter On Fighter! Breaking Down Chikadze!

Chikadze is definitive proof that if your skills are legit, little else matters. The kickboxer fought absolute trash on the regional scene before “earning” his UFC call up, but once he stepped into the Octagon, he’s been largely flawless. Undefeated (7-0) in less than two years on the roster, Chikadze has proven himself a Top 10 talent in a stacked division. Perhaps even scarier, Chikadze is heating up. That undefeated streak began with four straight decisions, but as the competition level rose, Chikadze started knocking dudes out!

He’s suddenly on the fast track to a title shot, but let’s first take a closer look at his skill set:

Chikadze does not throw anything gently. Having spent a great deal of his professional career as a kickboxer, Chikadze still fights as though he only has three minutes to work, putting bad intentions behind just about every strike thrown. That’s not to say he doesn’t set strikes up or feints, but even Chikadze’s setup shots look painful.

The Georgian striker is plenty comfortable from either stance, and he likes to work from the kicking range. Chikadze is quick enough to often lead with kicks and still land, and he chooses his targets well based on what stance he’s in. There’s more to it, however, as Chikadze will also mix more uncommon techniques into his kicking arsenal, like side kicks to the thigh or ax kicks.

These additional kicks may not land every time, but they do help disguise Chikadze’s stance shifts. Once Chikadze has his opponent reacting — and who wouldn’t react to the threat of a Chikadze power kick? — he’ll get crafty. Chikadze very much likes to raise his knee in a forward step, change stances, then blast a powerful round kick. Alternatively, Chikadze can chain kicks together well, and MMA fighters aren’t all that accustomed to dealing with two kicks in a row.

The famous “Giga kick” is the left round kick to the body or head, but the left round kick is a staple technique vs. Orthodox fighters for a reason, as it slams the shin into the open side of the body. Chikadze has a variety of setups to land his left kick. If he’s fighting from the Orthodox stance, Chikadze can quickly fire a switch kick from in place or chase his opponent down with a big step before blasting the kick.

Alternatively, Chikadze fights a fair percentage of the time as a Southpaw. In that case, little setup is required for him to shuffle into a brutal kick to the liver (GIF). From either stance, Chikadze can muddy the waters further by instead switching to a high kick if he notices his opponent’s hands beginning to guard their mid-section (GIF).

Chikadze’s boxing is interesting, as the “Ninja” tends to attack with really short combinations or in wild bursts. Either way, it’s all coming with power. Against Edson Barboza, Chikadze took the rare approach of willing fighting on the outside vs. the Muay Thai fighter, and he did great work with his jab as a result. Often, he stuck hard jabs from Southpaw, occupying Barboza’s lead hand before smacking it down and sticking him in the nose with a jab.

When Chikadze goes Southpaw, he really likes to lead with the cross. His step deep into the punch is similar to how he steps into his Giga kick, making his play on the classic Southpaw double threat particularly effective.

Typically, fighters like to punch first to set up kicks, and Chikadze definitely employs that strategy. However, he also mixes the order, often firing power kicks then following up with a surge of punches. Since Chikadze has such nice form on his kicks, he’s able to both land hard with the shin and maintain his balance. As a result, Chikadze’s opponents are often knocked off-balance, whereas Chikadze is in good position to swarm.

Opposite Barboza, Chikadze’s finish began with a step knee into punches, which follows the same concept. As Barboza backed off from the knee and attempted to reset himself, Chikadze lunged into a big punch. He did so with a bit of an awkward marching step to cover the necessary distance, but it stunned Barboza, and Chikadze never let his foe off the hook from that point forward (GIF).

Chikadze has improved his grappling quickly inside the Octagon. His first two UFC opponents managed to take him down, but since then, he’s denied all attempts to drag him to the canvas.

Throwing with so much power has pros and cons regarding takedown defense. The obvious con is that if Chikadze whiffs on a big hook and his opponent ducks underneath, well, it doesn’t really matter how good his defensive wrestling is — the takedown is happening. However, as a result of his ability to dictate range and fire punishing kicks and punches, his opponents often have difficulty timing their level changes.

Ducking into a Giga kick is a recipe for disaster.

As such, several opponents have tried to clinch up with Chikadze then take him down, which hasn’t proven a great strategy. Chikadze is a physically strong Featherweight, and he has the cage to help keep him upright. As a result, Chikadze has generally done well to stall out takedown attempts and eventually regain open space.

Chikadze was strangled in his 2018 Contenders Series bout via rear=naked choke, and he showed a lot of inexperience in that loss, turning his back while trying to scramble. As mentioned, he’s improved quite a bit in that regard since, though he has not been put in any similarly compromising positions inside UFC itself … yet.

In his bout vs. Barboza, Chikadze actually chased the submission against his wounded foe. As Barboza tried to tie up and wrestle to recover, Chikadze jumped on an anaconda choke attempt. When Barboza was able to escape his hip control and push away, Chikadze smartly transitioned to a d’arce choke. It was nice work on both attempts, but Chikadze never quite managed to sink his choke arm deep enough to force the finish.

Giga Chikadze is already a scary prospect for most Featherweights, and he’s improving at a frightening pace! If Chikadze wipes the floor with Kattar, he’s a proven title threat, and he will likely find himself in a title eliminator sooner than later. Perhaps — and this is a long shot — he’ll even be able to replace the recently injured Max Holloway?

Remember that MMAmania.com will deliver LIVE round-by-round, blow-by-blow coverage of the entire UFC Vegas 46 fight card right here, starting with the ESPN+ “Prelims” matches, which are scheduled to begin at 4 p.m. ET, then the remaining main card balance (also on ESPN+) at 7 p.m. ET.

To check out the latest and greatest UFC Vegas 46: “Kattar vs. Chikadze” news and notes be sure to hit up our comprehensive event archive right here. 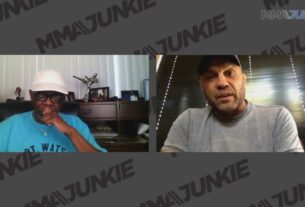