White: Edwards ‘100 Percent’ Next For Usman

The drought is over.

UFC welterweight contender Leon Edwards is “100 percent” next in line for a shot at the 170-pound title, currently held by Kamaru Usman. That’s according to UFC President Dana White, who told TSN Sports that “Rocky” was (finally) getting his due.

Edwards (19-3, 1 NC) and Usman (20-1) met once before, with the “Nigerian Nightmare” taking a unanimous decision victory at UFC on FOX 17 more than six years back. That was the last time Edwards, now 30, tasted defeat inside the Octagon.

As for Usman, he’s a perfect 15-0 under the UFC banner and 6-0 in welterweight title fights. The former TUF 21 champ was able to end his rivalries with both Colby Covington and Jorge Masvidal, going up 2-0 in separate title fights.

No date or location has been revealed for the Usman vs. Edwards title fight and nothing should be considered “official” until contracts are signed. That said, “Rocky” is the next available contender in the 170-pound rankings and would probably only lose his spot due to injury.

Expect Vicente Luque, Belal Muhammad, and Khamzat Chimaev to be ready on standby. 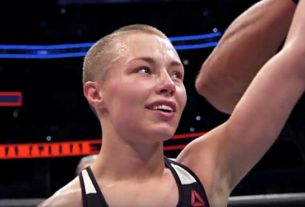 Omar Morales vs. Gabriel Benitez added to May 13 UFC event