As Medical Coalition Targets Rogan, Schaub Comes To His Defense

Brendan Schaub is coming to Joe Rogan’s defense after a coalition of medical professionals and educators called on Spotify to rein in Rogan’s alleged misinformation.

Recently, a letter was published by over 200 doctors, nurses, professors, and scientists imploring Spotify to create a policy to help tackle misinformation on the streaming platform. The specific material the coalition was referencing is the content disseminated and facilitated by Joe Rogan on The Joe Rogan Experience podcast.

This comes after a controversial episode with Dr. Robert Malone aired last month, with the doctor being accused of “promoting baseless conspiracy theories” regarding COVID-19.

“This is not only a scientific or medical concern; it is a sociological issue of devastating proportions and Spotify is responsible for allowing this activity to thrive on its platform,” the letter wrote regarding JRE & the Dr. Robert Malone episode.

As of this writing, Spotify has not issued a response to this letter, but Rogan’s good buddy and fellow podcaster/comedian Brendan Schaub has addressed the criticisms Rogan has received. Schaub argues that, unlike other mainstream news outlets, Rogan does not have a hidden agenda.

“It’s like you want to shut this doctor down, which [Anthony] Fauci [Chief Medical Advisor to the President] has done over and over again. But I don’t agree with him. He tries to get them canceled. He’s notoriously known for that.

“But also with this it is like hold on, you want to cancel Rogan and this doctor because they don’t agree with what you’re saying? He is more qualified than you guys are… They don’t like that Rogan is this outliner who destroys all of them combined. So they’re trying to censor that… Joe doesn’t have an agenda. If you watch CNN or Fox, there’s an agenda, plan or narrative that they are pushing. Joe is not. (h/t Sportskeeda).

What do you make of all the criticisms against Joe Rogan, including the letter written by the medical coalition that targeted him?

As Medical Coalition Targets Rogan, Schaub Comes To His Defense 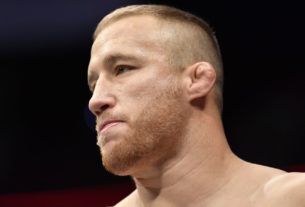 ‘Terrified’ Gaethje Is Doing It For The People