Dana White says Henry Cejudo can’t just jump into any weight class for title fight: ‘It’s not how it works’

It appears Dana White didn’t even entertain the idea of Henry Cejudo fighting for the UFC featherweight title.

When Max Holloway was forced to withdraw from his trilogy bout against featherweight champ Alexander Volkanovski at UFC 272, former dual-champion Cejudo (16-2 MMA, 10-2 UFC) threw his name in the hat.

Cejudo retired after defending his bantamweight title against Dominick Cruz at UFC 249 and the only fight that seemed to gauge his interest for a potential comeback is Volkanovski (23-1 MMA, 10-0 UFC). But according to White, he’s not in a position to get a title shot after being on the sidelines.

“I can tell you this: The ‘Korean Zombie’ (Chan Sung Jung) has been here fighting,” White told BT Sport. “This guy’s retired. He’s been off for how many years now, and he wants to come in and fight Alexander Volkanovski? You’ve got guys like the Zombie, Josh Emmett, Giga (Chikadze) who’s fighting this weekend. You’ve got these guys that are in here doing it three times a year and working their way up. For Cejudo to retire and then just think he should be able to come in and jump into any weight division and take on the champion, it’s not how it works.”

The UFC opted to go with Jung, who will step in to face Volkanovski at UFC 273 on April 9. Chikadze faces Calvin Kattar in the main event of UFC on ESPN 32 on Saturday and could emerge as the next title challenger with a win.

As for Cejudo, his quest for a third UFC title will have to wait. But the former champion weighed in on Twitter and said, among other things, that White is “scared” and the UFC is a “monopoly.”

No crown. No cringe. No gimmick. Just facts…

I told @AliAbdelaziz00 “make this fight happen”. This isn’t a GSP situation, I’d defend the belt. The UFC & Dana White don’t want to give me a chance to make history. Dana is scared. It’s a monopoly.

Photos: Henry Cejudo through the years


Dana White says Henry Cejudo can’t just jump into any weight class for title fight: ‘It’s not how it works’ 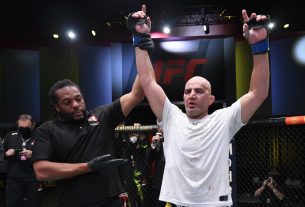 Usman Interested In Coaching TUF Opposite Covington or Masvidal