At LFA 121 in Dallas, Cyr (4-0) faced Alden Coria, entering the contest as a massive underdog. Coria (5-1) had control of the fight in the first two rounds, seemingly heading towards a unanimous decision win if the fight saw the final horn.

However, Cyr had his say in the outcome and attempted the submission he called for before the fight, a twister. The attempt was deep and somehow Coria did not tap from the rare technique. Cyr didn’t completely give up on submissions after the twister failed though, and transitioned to a rear-naked choke while Coria’s arm was trapped behind his back.

Check out video of the finish below (via Twitter):

The magic mullet almost had a twister too! Michael Cyr came to play tonight! #LFA121 pic.twitter.com/olLgkjxK7o

Cyr pulled off the comeback victory as a huge underdog to pull off an early submission of the year candidate. Three of his four professional wins have come by submission, while the other was a first-round TKO. 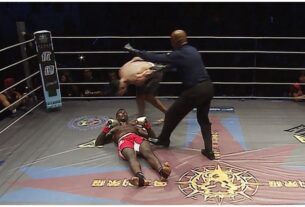