The much-anticipated rematch between Sterling and Yan, originally scheduled for UFC 267 last October, was set to go down at UFC 272 in March. After they were to unify the bantamweight title in the co-main, Alexander Volkanovski was targeted to defend his featherweight belt against Max Holloway in the main event.

But after Holloway withdrew through injury and the trilogy clash was off, Volkanovski’s next appearance, expected to be against “The Korean Zombie” Chan Sung Jung, was moved back a month to UFC 273. Following that fight to April was the bantamweight unification bout.

With both title fights pushed back, UFC 272 will now be headlined by a non-title grudge match between Jorge Masvidal and Colby Covington.

During a recent episode of his YouTube podcast, #12-ranked bantamweight contender Sean O’Malley commented on the adjusted schedule. His takeaway from the decision to move Sterling and Yan’s rematch to UFC 273 was that the pair simply aren’t big enough to headline a pay-per-view.

Sterling won the title last March at UFC 259. Despite being behind in the fight heading into the fourth round, an illegal knee from Yan saw “Funk Master” become the first UFC champion to be crowned via disqualification.

After lingering issues from neck surgery forced him out of UFC 267, Yan faced Cory Sandhagen in Abu Dhabi and won interim gold, setting up a unification showdown with his arch-rival in 2022.

Do you agree with Sean O’Malley’s assertion that Aljamain Sterling and Petr Yan aren’t big enough names to headline their own pay-per-view? 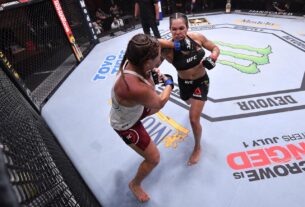