MMAmania.com will deliver coverage of Bellator Dublin on Showtime right here. To check out the latest Bellator MMA-related news and notes be sure to hit up our comprehensive news archive right here.

Henderson managed to snap his three-fight losing streak by defeating Islam Mamedov via split-decision in his last fight, giving the Khabib Nurmagomedov-protege his first loss in 13 years. After his the fight in his hometown of Pheonix, Arizona, many felt “Smooth” was contemplating retirement, especially if he had lost. But the victory gave him the boost to keep going in what is now a 16-year long pro MMA career. He will now attempt to pick up his first back-to-back win streak since 2019 when he goes into hostile territory to face off against Peter Queally, who is currently the No. 7 ranked Lightweight in Bellator. “The Showstopper” is coming off a loss to current 155-pound champion, Patricky Pitbull, his first setback in three years. Queally’s plan of attack is no secret; he loves to keep it on his feet and engage in a good old slugfest. While Henderson isn’t opposed, his best course of action to victory will be to try and take it to the ground in order to submit his foe. Queally has yet to be submitted in his pro career but Henderson, a jiu-jitsu black belt, has nine submission wins on his resume and he would love nothing more than to be the first to do it. It just won’t happen this time around. Queally is as tough as they come and if “Smooth” wants the win he is going to have to earn it in five hard rounds. Queally will have the crowd behind him and that adrenaline pump will push him through.

Romero and Manhoef were set to throw down at Bellator 280 before a hand injury forced Manhoef out of the event. Now, two of the oldest active fighters in the game will face off in a battle of legends. Manhoef — who is 46 years old — hasn’t competed in nearly two years and was last seen losing to Corey Anderson at Bellator 251 on Nov. 2020. The hard-hitting striker is just 2-3 over his last five fights, and while he may be up there in age he still packs plenty of power behind his punches. And Romero (45) does, too, with that power being on full display when he peppered Alex Polizzi all night long in his previous bout before knocking him out with just one second remaining in the fight, cracking his jaw in the process. The edge in striking has to go to Manhoef but he does tend to get a bit wild with his strikes, which sometimes works for him and other times against him. It’s a roll of the dice. Manhoef loves to bang it out on the feet, as well, which has always puzzled most experts because his wrestling is top-notch. Still, “Soldier of God” is all about the entertainment value and if it’s a brawl his opponents want it’s a brawl they will get. I don’t see this fight going the distance, and I beleive Romero will land enough to put “No Mercy” away in the final round. Of course, “Soldier of God” has to survive that initial burst from Manhoef, first.

Burnell had his seven-fight win streak snapped by Adam Borics at Bellator 276, ending his hopes of landing a shot at the title. Now, Borics will face Featherweight king, Patricio Pitbull, while Borics will look to regroup against Pedro Carvalho, who is coming off a loss to Piotr Niedzielski. Carvalho has seen better days inside the Bellator cage because over his last four fights he is just 1-3. That’s a drastic difference from his hot start that saw him go 4-0 in his first four fights with the promotion. The experience level here is dead even here but overall Borics is just a tad more well-rounded. Both men love the jiu-jitsu game, as Burnell has nine wins by way of submission to Carvalho’s six. Burnell has been forced to tap twice and Carvalho only once. So what that tells us is if it goes to the ground we can expect a stalemate. While we can say it’s going to be a grappling battle, the fact that they are both so well-versed in the submission department could force them to trade on the feet. I’d give Burnell the edge there, but just barely. He doesn’t possess crazy knockout power, but he will show enough technique to get the win.

McCourt suffered the first loss of her Bellator MMA career after Sinead Kavanagh busted her up at Bellator 275 en route to a unanimous decision win the last time the promotion was in Dublin earlier this year. Ranked No. 5 out of 7 in the women’s Featherweight division, McCourt is out to rebuild her momentum against the No. 7 ranked fighter in the weight class. Silva recently bagged her first win under the Bellator banner by defeating Janay Harding at Bellator 279. Prior to that, she was 0-2 with losses to Julia Budd and Arlene Blencowe, which is nothing to hang your head too low over. To say that either fighter is a specialist in any area would be a stretch, so I won’t go there. Silva has never submitted anyone in a pro fight and has only two KO/TKO wins under her belt. As for McCourt she has one knockout and two submissions, so the chances of this fight going the distance are pretty high. It’s going to come down to who can control the pace and who can impose their will enough to impress the judges.

Clarke was initially set to face off against George Sasu in a Featherweight showdown, but a last-minute switch will now see him take on Bellator newcomer, Rafael Hudson, in a catchweight fight of 150 pounds. Clarke is a rising star at 145 pounds, winning all five of his pro MMA fights — which all took place with Bellator — two by way of submission two decisions, and one knockout. He has shown great versatility thus far, and the young up-and-comer wants to add to his undefeated (5-0) streak by giving Hudson a rude welcome to the company. And he has a great chance of accomplishing that because Hudson has struggled mightily, going just 1-3 in his last four fights. The Brazilian wants to show out and pull off the upset, but I just don’t see it happening here. Clarke is too well-rounded, too quick, and has the momentum and hometown crowd behind him. It’s all set up for him to take home a nice highlight reel finish

To check out the latest Bellator MMA-related news and notes be sure to hit up our comprehensive news archive right here. 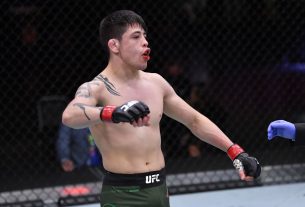 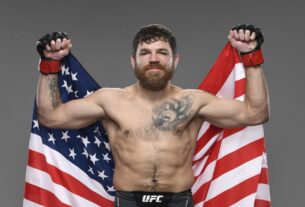