‘Chauvinistic’ White Admits To Wrongs Ahead Of Women In UFC

Dana White found out that you should never say never.

In Feb. 2013, Ronda Rousey and Liz Carmouche battled over the Ultimate Fighting Championship (UFC) Bantamweight title in the first fight between women in promotional history. This came after the UFC President infamously stated that women would “never” fight in the Octagon.

Having had nearly a full decade now to reflect on his feelings towards the concept, White admits he was in the wrong, seeing that the inclusivity has been largely beneficial for not only UFC, but mixed martial arts (MMA) as a whole.

“At this time, I’m trying to get people to accept men fighting in a cage, right?” White told the BASIC! When Cable Was Cool podcast (h/t Bloody Elbow). “I went to a fight up in northern California once, where there was a horrible mismatch between women. And I was like, ‘Oh, my god.’ And listen, I’m not gonna lie, there’s a little bit of that — being a man — little chauvinistic; in that, ‘Women are pretty, women are — bwah, you don’t wanna see women get beat up, you don’t wanna see —’ In a million years, I never saw this coming; where these women would be so technical, and so tough, and so badass. I mean, the women that we have now, in the UFC? There’s a lot of things I saw coming, I didn’t see that one coming. That’s for damn sure.”

It was never a secret that the aforementioned Rousey’s success and quick rise through Strikeforce was the catalyst for women arriving in UFC. Before that inaugural bout against Carmouche, White flat-out crowned Rousey as the champion. This wasn’t the first occasion White had done such a thing when absorbing promotions as the same situation happened to World Extreme Cagefighting (WEC) before Strikeforce, making Jose Aldo the inaugural Featherweight champion without technically winning the title.

Ultimately, the plan all worked out in the end and UFC’s roster gets larger by the year.

“But the thing that changed everything was, I met Ronda Rousey,” White explained. “Ronda Rousey manifested all these things that have happened. And I had a meeting with her one day, and halfway through the meeting I’m like, ‘Holy s—t, I think I’m gonna do this. And I think she’s the one to do it with.’ And thank god I was right.

Paul Craig Names Oezdemir and Walker As Possible Next Opponents 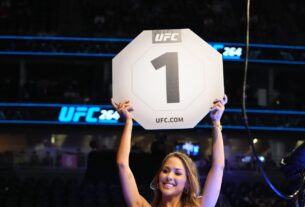 Teixeira Explains Why Israel Adesanya Would Turn Down Alex Pereira