Ngannou holds wins over the top 3-ranked contenders: Ciryl Gane, Stipe Miocic, and Curtis Blaydes. Former titleholder Miocic spit with Ngannou in their two bouts. Gane rebounded from his loss to Ngannou by defeating Tai Tuivasa on Sept. 3rd. Blaydes is riding a three-fight winning streak. Any of those matchups would be justified, but Ngannou wants Jones.

In an interview with MMA on SiriusXM Podcast, Ngannou made it clear who he wanted to face in his return bout and way. “Obviously it would be Jon Jones. I need a big payday,” he said with a laugh.

“Fighting Jon Jones is more than a payday, makes a big statement. It’s a big challenge. I mean, the man dominated the sport for over a decade, so I think he’s a good test.”

When Jones vacated the light heavyweight title in August 2020, he stated his intentions of moving up to the heavyweight division to make a championship run in a second weight class. According to UFC president Dana White, Jones is ready to make his heavyweight debut, and has been.

Jones is widely considered the greatest fighter to ever step inside the octagon. He ended eras, took out legends, and essentially held the 205-pound championship from February 2011 until he relinquished it in 2020. Yes, Jones was stripped of the belt three times, but he’s never been defeated in a championship bout. His lone career loss was by disqualification in a fight he was dominating and about to finish in 2009.

“I still consider Jon Jones as the greatest of all time to ever step inside the octagon,” Ngannou said.

Bouncer who choked Dillon Danis: He was ‘a little agitated’ I’d never heard of him 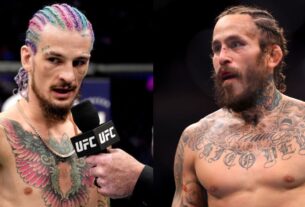