On Monday, the UFC and U.S. Anti-Doping Agency jointly announced a set of revisions to the UFC’s anti-doping policy following a lengthy behind-the-scenes review of their previous anti-doping rule book. But what does it all mean for the fighters? Here’s an explainer:

The issue of contaminated supplements has become a hot-button topic over the course of the last few years, with a host of UFC fighters being flagged for positive tests after unknowingly ingesting banned substances contained within contaminated supplement products. It has robbed fighters of valuable career time as they serve out suspensions, and has also cost athletes time, stress and money as they go through the legal channels to ensure their names are cleared.

The changes announced by the UFC and USADA attempt to improve the situation surrounding the issue of contaminated food, drink or supplements and reduce the number of these cases moving forward, while also providing products and information to help ensure athletes are taking supplements that are less likely to be contaminated.

What changes have been made?

The UFC and USADA have created a definitive list of banned substances, called the “UFC Prohibited List,” which specified not only the banned substances themselves, but also “decision concentration levels” for each substance. These are the threshold limits that denote the amount of a banned substance an athlete would need to have in their system in order for it to offer a performance-enhancing effect.

In addition, the UFC and USADA have compiled a list of approved supplement certification companies, and have strongly recommended athletes only use supplements that are certified by one or more of the listed companies.

The UFC will also make approved certified supplements available to their athletes via the UFC Performance Institute, with supplement company Thorne chosen as the official supplement provider to the UFC PI.

How does this affect the athletes?

Previously, if a fighter unknowingly ingested a banned substance via a contaminated supplement, he would be flagged as having a failed test. For a substance like Ostarine, that could see him hit with a two-year suspension. However, if the fighter could then prove that the substance was unintentionally ingested, and prove that it came from a contaminated supplement, based on past cases (including those of Tim Means and Yoel Romero) he could have his suspension reduced to six months.

Under the new UFC Anti-Doping Policy, an athlete’s initial test result for levels below the newly-instituted thresholds would not automatically be flagged as a failure. Instead, it would be marked as an “atypical” result, with no sanction given unless there is additional evidence of an anti-doping violation.

It should mean fewer cases of fighters being initially flagged for anti-doping violations after unintentional ingestion of banned substances via contaminated supplements.

Does this mean athletes can’t take their own choice of supplements?

Not exactly. Just like food, athletes can put into their bodies whatever fuel and supplements they choose, providing they are not intentionally ingesting banned substances. However, the UFC and USADA has stated that supplements certified by companies on their approved list are “… the ONLY dietary supplements that should be used by UFC athletes.”

Of course, this is unenforceable in reality – you can’t force athletes to take a specific brand of supplement – but by stating in such strong terms that athletes should only use those certified products from companies listed, they’re offering a clear statement that they don’t want their athletes taking uncertified products.

With that said, if you’re an athlete and deciding which supplements to take, choosing ones on the UFC’s certified list certainly seems to make a lot of sense.

What will the changes achieve?

In theory, the changes should help reduce the number of unintentional positive results from contaminated supplements by addressing both ends of the equation.

On one end, athletes are now strongly guided towards only taking certified supplements, which should reduce the possibility of taking contaminated products. And on the other end, the introduction of decision concentration levels for banned substances should help reduce flagged tests to only those which are deemed to contain enough of the banned substance to produce a performance-enhancing effect.

What other changes are there?

In addition to the new rules around banned substances, decision concentration levels and certified supplements, the new UFC Anti-Doping Policy also includes the addition of new rules regarding IV infusions, and has specified a shortlist of instances where IVs are now permissible without the need for a therapeutic use exemption (TUE).

Per the UFC’s athlete guide, IVs are allowable under the new UFC Anti-Doping Policy under the following circumstances only:

Those received in the course of hospital treatments, surgical procedures, clinical diagnostic investigations
Those received by a licensed medical professional after a licensed physician determines that they are medically justified
IVs of less than a total of 100 mL per 12-hour period

In addition, all IV use during fight week is subject to approval by the athletic commission, with athletes required to receive permission beforehand, and report back once the IV has been administered. And if IVs are administered during fight week for medical reasons, the athletic commission retains its right to pull a fighter from an event if it sees fit. 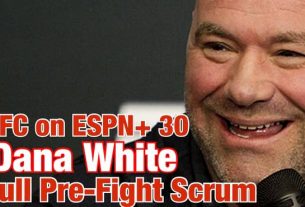 Dana White: Contingency Plan for US fights if Las Vegas shuts down again | UFC on ESPN+ 30