Cynthia Calvillo is aiming right at the top of the division.

With only one career blemish, top-ranked strawweight Calvillo (8-1 MMA, 5-1 UFC) currently is riding a two-fight winning streak as she heads into her Saturday fight against Marina Rodriguez at UFC on ESPN 7.

“One of my dream fights, and what I hope to get one day, is to be able to fight Joanna Jedrzejczyk,” Calvillo told MMA Junkie. “She’s always been the most dominant strawweight fighter ever, and so I would love to fight her some day. If not, (Zhang) Weili, whenever – next year, I’ll be ready for sure. Weili was No. 6 when she got her title shot, so you never know what could happen.”

Cynthia Calvillo wants Trump at UFC D.C. so she can ask why Master Thong’s visa was denied

Cynthia Calvillo: If fight hits the canvas, ‘it’s game over’ for Marina Rodriguez at UFC on ESPN 7

Calvillo was initially slated to take on former UFC strawweight title challenger Claudia Gadelha, but the fight fell through. She now takes on an undefeated rising prospect in Rodriguez. Calvillo said she is happy with the direction the division is heading and all the new talent that has emerged.

“The strawweight division right now is the hottest female weight division, hands down,” Calvillo said. “I mean, you don’t see fights like that. You do see Amanda Nunes – she is pound-for-pound the best female fighter right now. But as far as which one is the most stacked women’s division, that will be the strawweight division, and I’m excited. There’s so many great fighters. For a long time, for the first couple of years, it was always the same top 10 fighters on the top, and I think all those ladies are making their way out and all the new blood is coming up. I’m stoked. I’m really excited and I’m happy that some of the women that I still want to fight are still sitting up there at the top.” 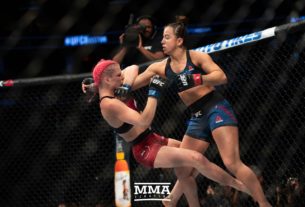 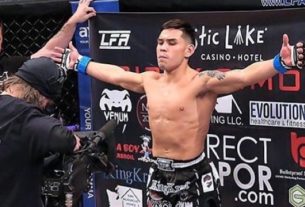