A mishap with her weight meant Jinh Yu Frey no longer had a title to defend Friday night, and that made her win a little anticlimactic.

When Frey (9-4) was announced the unanimous decision winner over Ashley Cummins (7-5) with a trio of 48-47 scores in the five-round main event, many in the crowd booed their disapproval. And it did seem like Cummins may have been just a little quicker than Frey most of the night.

But it was Frey who took the win in the atomweight title fight – even though she no longer had a 105-pound title to defend. Only Cummins could win the belt after Frey missed weight by 0.8 pounds at Thursday’s weigh-in, and she fell short in a rematch from a 2017 fight that Frey also won.

“It feels good to get a win, but it still can’t erase the fact I missed weight,” Frey said afterward. “We’re going to go home and reevaluate things and see if 105 is the place to be, or if it’s time to go up.”

A Cummins win would have given her the atomweight title. But since Frey missed weight and was stripped, the belt becomes vacant – with Frey now at the top of the heap to try to win it back.

When Cummins and Frey first fought, the bout was largely contested on the canvas and Frey walked away with a unanimous decision. But that wasn’t the case this time around.

The fight stayed standing in the first round, and each fighter worked kicks to the body and straight punches. But despite some big swings from each, neither landed anything truly definitive – though Cummins seemed to come on stronger than Frey late in the round.

In the second, Frey ducked under a punch and looked for a takedown. Cummins defended, and Frey was forced to clinch up. She looked for a trip takedown, but Cummins turned things around and broke away. Cummins landed a solid combination two minutes in, but then ate a big left a few seconds later. Cummins landed hard in return, and it forced Frey to tie her up again. Cummins was cut over her right eye from the Frey left hand, but she pushed forward without a care. A Frey punch briefly put Cummins on the canvas, but she quickly bounced back up.

After a close third, with a couple minutes left in the fourth round, Frey put a nice combination together. But Cummins kept pushing forward with jabs, hooks and kick attempts. Frey stayed busy late in the round, but couldn’t put anything definitive on Cummins.

Cummins thought about a takedown a couple minutes into the final round, but it wasn’t there. Instead, the fight stayed where it had been the first 22 minutes, and stayed mostly even. With neither fighter taking an obvious advantage, it went to the judges with a fair amount of uncertainty over which fighter would get the nod.

Miranda Maverick stayed after a finish throughout the co-main event. It never came, but Maverick (7-2) settled for a fairly dominant win, and arguably the biggest of her career against former UFC fighter Pearl Gonzalez (10-5). Maverick swept the scorecards with a pair of 30-27s and a 30-26.

Thirty seconds in, Gonzalez landed a pair of body kicks. But 30 seconds later, Maverick drove in and took Gonzalez to the canvas. She worked around and passed to side control 30 seconds later and tried to go to work with ground-and-pound while Gonzalez defended. When Gonzalez tried to scramble her way out, Maverick took her back with more than half the round left. Maverick landed a series of punches to try to soften Gonzalez up, then with 90 seconds left worked for a rear-naked choke. But up against the fence, Gonzalez reversed with a minute left and got on top. She was in danger of a triangle choke from Maverick, but cleared it and tried to land big ground-and-pound of her own before Maverick reversed again near the horn.

Just 20 seconds into the second round, Gonzalez took Maverick to the canvas and grinded down the clock there until Maverick eventually got back to her feet. There, she spun Gonzalez around and landed some short knees and then scooped her legs up and delivered her own takedown with a minute left in the frame. With 30 seconds left, Maverick jumped to full mount and landed heavy punches and elbows, but couldn’t get enough done for a stoppage.

The two traded kicks early in the third, and a spinning back fist from Gonzalez landed hard. But her momentum allowed Maverick to clinch her up, then take her down a minute in. From her back, Gonzalez briefly worked for a triangle choke, but couldn’t get close enough while Maverick postured up and landed knees to the body. With two minutes left, Gonzalez got back to her feet, but Maverick immediately went back to a takedown attempt. She got it, then eventually took Gonzalez’s back again. 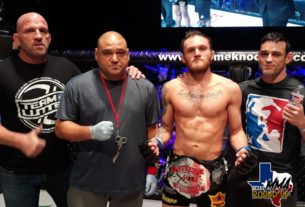 Tyrell Fortune to Face Azunna Anyanwu at Bellator 233 on Nov. 8