Khabib: McGregor Vs. Cerrone Was For ‘90% Of MMA Fans Who Have No Clue’

Khabib Nurmagomedov wants to make it clear that he only trashed Donald Cerrone so fans would understand the truth behind UFC’s ‘plan’ to rebuild Conor McGregor’s reputation.

Khabib Nurmagomedov continues to be unimpressed with the UFC’s efforts to set up a rematch between him and Conor McGregor. When Dana White announced that the winner of McGregor vs. Cerrone would earn a title shot, Khabib dismissed the fight as being ‘minor league.’ And while White continues to claim Nurmagomedov won’t turn down an official offer to fight Conor again, the Dagestani wrestling ace sure doesn’t sound enthused about the whole situation.

During a press conference in Russia (video via RT Sport), a member of the press asked Khabib if he regretted dissing Donald Cerrone so much in the lead-up and aftermath of UFC 246.

”Maybe,” Khabib answered. “I think it may be harsh but it’s true. A person describes his feelings… I won’t repeat what I said. I was basing it on how well they picked an opponent for [Conor McGregor’s] return so as to wow people. Why? Because 90% of people who watch MMA have no clue about the sport. They just watch it and don’t even know the names. And the other 10% … millions of people watch, but there aren’t a million fighters. There are 300, 400, 500 that fight in the UFC. They have trainers, so let’s say 10,000 people that know MMA. They see who loses and under what circumstances, what moves, when he fought, where he fought, what organization.”

”Few people know those details, others just don’t care who’s fighting and how, who he fought in the past, who the opponent is, they don’t know anything. They just watch the fight. And UFC works very well with that. So they picked [Cerrone] and their plan worked and people started to talk about it again, about a rematch and other stuff. Cerrone lost seven out of his last ten fights. A man comes out ten times and loses seven and is called a legend. Well, let him be a legend, but his time is up.”

Now the UFC wants to throw McGregor right back into title contention ahead of several higher ranking lightweights, and Khabib sounds legit offended.

”We’re talking about a contender fight, about a contender, a person who’s supposed to come out and fight for a world title,” he continued. “There are other fighters who have proven themselves with their status, their convincing victories. There are other contenders, but [UFC] went another route, one that’s more suitable for the media, the people, but one that makes no sense to experts.”

He was still apologetic for highlighting Cerrone’s shortcomings as an opponent as forcefully as he did.

”That was before the fight,” Nurmagomedov finished. “After the fight many people agreed with me, but what you’re asking, that it was stupid … I agree. I just wanted to reach people, for them to understand what kind of an opponent they put in front of [McGregor].”

Certainly doesn’t sound like someone interested in rematching McGregor without the Irish sports star winning another fight. Perhaps against his manager’s preferred choice for a title eliminator: Justin Gaethje? 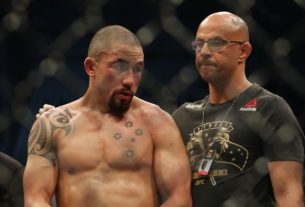