Heading into her upcoming fight on Saturday, Megan Anderson has found a new lease on life.

The now 30-year-old will face the unbeaten Octagon debutante Norma Dumont at UFC on ESPN+ 27. The event takes place at the Chartway Arena in Norfolk, Va. and will be headlined by Joseph Benavidez and Deiveson Figureiredo battling for the vacant UFC flyweight title.

In that fight, Megan Anderson looked and felt as comfortable as she has felt in her UFC career and a lot of that had to do with a newfound mentality. On the road to turning 30 years of age, and after a lot of soul searching, something just clicked.

“It’s really funny because when I turned 29, I flew home and I surprised my parents for my 29th birthday and I was absolutely dreading [turning] 30,” Anderson told BJPENN.com. “I was like, ‘oh my god’. All of the milestones I expected myself to have by the time I turned 30, I was nowhere even close to that happening. Then the Rochester fight happened and I was like, ‘well, s**t! This is my career, what the f**k is going on with that?’ I was dreading 30 so bad.

“Over the last, I would say, three to six months, I just hit a different kind of vibe,” Anderson said. “I just don’t give a s**t, anymore. I really don’t. I have this great sense of who I am and the type of person that I am, the positivity that I want to surround myself with. I really kind of felt that my patience, hard work and dedication is going to pay off. Big things are still to come and I’m ready for when it happens.”

One of the aspects of the fight game and being in the limelight — especially in mixed martial arts — is dealing with some of the trolls and haters amongst the fans. While there are many fans who enjoy the sport, the athletes, the hard work it takes to get into a cage and fight another human being, there are also many who are quite judgmental.

A lot of hate and negativity has come Anderson’s way over the years and she has learned to take it all in stride. With that, Anderson has felt a giant mental weight lifted off of her shoulders and continues to work hard to improve the all-so important mental state needed to be a professional fighter on the biggest stage.

“It really is [a freeing feeling],” Anderson explained. “The amount of s**t and s**t talking people have given me, a lot of hate, it used to get to me all the time. Man, I just laugh about s**t now. If anything, I just feel sorry for those people now. I’m doing my thing, I’m getting mine, making sure I get paid, making sure I’m getting what I’m worth. I’m just doing me. I just feel sorry for those people because not one second of my day goes by that things negatively towards somebody else.

“The idea of going online and saying some s**t, it says more about them than me. It really is freeing to get to this point. It just takes a lot to get there, that’s for sure.”

Catch Megan Anderson back in action at UFC Norfolk this weekend.

The post Megan Anderson embracing the art of ‘not giving a s**t’ what people think appeared first on | BJPenn.com. 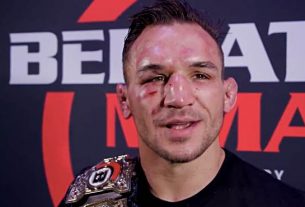 Michael Chandler on Tony Ferguson: ‘El Cucuy is the scariest guy in the division’ | UFC 254

Fighters React To Michelle Waterson vs. Angela Hill At UFC on ESPN+ 35