This is an ugly one. UFC Flyweight Ashlee Evans-Smith is accused of stealing medical supplies that were intended to be donated to local nurses and hospitals to help with the COVID-19 pandemic. Per the Facebook post below, Evans-Smith and her boyfriend, Mike Wilson Jr., went to pick up a dresser (unrelated to the medical supplies) but instead took the opportunity to snag the masks and gloves as well.

I honestly can’t even believe that this happened today…
For those that don’t know, I was contacted by an old friend…

If you can’t read the Facebook post, here’s the relevant quote: “Ashlee and her bf showed up and loaded the dresser into her car. After the dresser was loaded, Ashlees BF was seen walking back to my front door, and taking the basket of medical supplies back to the car with him while Ashlee watches and waits. Then they drive off. I’m thinking this must be a mistake, who takes a basket full medical items that everyone know are in short supply right now, from someone else’s home? I tried messaging her immediately telling her these are donations and no response.”

Initially, there appeared potential for the whole thing to be some type of misunderstanding. However, that appears less likely now after police intervention. When a sheriff returned the box of supplies, the original owner, Selina Cohen, realized that half of the original quantity was missing.

Seriously so disgusted with Ashlee Evans-Smith and Mike Wilson JR. They seriously had the nerve to keep items from the…

In addition, Cohen was kind enough to provide us with some since-deleted Instagram stories from Evans-Smith’s account. In the video below, Evans-Smith denies the whole thing as a misunderstanding.

She also shared screenshot of her boyfriend’s text messages, who insults Cohen several times before also labeling the incident a “misunderstanding.”

Aside from these deleted posts, Evans-Smith has yet to make an official response. Stay tuned for any further updates.

Once again, Jordan Burroughs is the f*cking coolest.

I knew it was coming… for a week at least. But speculation and actualization are not quite the same. So when the official news broke, a little piece of me broke right with it. 2020 Olympic Games postponed to 2021. A crucial and necessary decision for the protection of humanity, and still it stings. When I walked away from Rio without a medal in 2016, I contemplated retirement. Not because I couldn’t do it anymore, but because I knew that it would require another four years of tremendous work to get back. I was unsure if I was willing to dedicate another four years of my life to reach that stage. Yet, here we are, and there it goes. The race that I was once afraid to embark on because of its length just moved its finish line a little further. But I’m still in the race. My dreams are delayed, but they won’t be denied. I ingest this news, cry about it momentarily, and then begin, once again, to prepare in silence. Banished from the wrestling room, and confined to my living room. Isolated completely from the familiarity and solace of the padded walls adorning my typical refuge. I consider both homes. But to fulfill my civic duty I trade wrestling mats for carpet, human bodies for bulgarian bags, and sprints for Peloton pedal strokes. Imperfect? Yes. Ideal? No. But I’m far from stationary and I won’t be stopped. I stand up from my couch, walk into the bathroom and look deep into the mirror. I’ve got to live what I project. I choose to trust the blueprint God has laid out for my life even when I don’t understand it. It’s easy to have faith when everything is going as planned. But can you maintain hope in the midst of adversity and the chaos of uncertainty? That’s the real test. Yes and yes. There’s still gold on the table. Let’s go get it. JB ——————————————————————— Credit : @geoffriccio

A cool moment most of us missed from an insane fight:

Blink and you’ll miss it moment of sportsmanship from #UFC248:

After knocking out Drakkar Klose, @beneildariush sympathetically gestured to Klose’s girlfriend Cortney Casey cageside, who appeared to let him know it was okay.

The friendship between Israel Adesanya and Darren Till is, quite frankly, adorable.

Dillian Whyte: “I’ll fight Stipe Miocic. I’ll kick him in the face… Yeah, I’ll fight UFC. One boxing, one MMA, tell Dana White to hit me up. I’ll fight Francis Ngannou. I would lick him down. He ain’t got not chin, he’s a coward. I would knock out Francis Ngannou, trust me.”

As someone who definitely struggles with kick placement, allow me to promise you this is both important and impressive!

#QuarentinePadWork Working Technique, Balance, Range and Limb Control with teenage prodigy and Future World Champion @southpawsammyjoe always impressed with her composure and focus in every single thing that she does!!! #CSAVSTheWorld

The support of a committed significant other is always hugely important to an athlete’s success, but wives around the world are taking a more active role in their husband’s training!

Leg day with @parisfury1 in the fury household just another day…..

Caught at the very end of the kick!

What video games are y’all playing while locked up at home?

Midnight Music: A track that probably should’ve earned a spot on my walkout songs list: 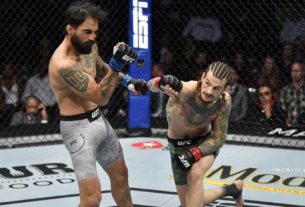