UFC on ESPN 9, which takes place this weekend (Sat., May 30, 2020) inside UFC Apex in Las Vegas, Nevada, may be short on great match ups, but at least there’s a couple of interesting newcomers to check out. On this edition of “New Blood,” the series where quarantine shenanigans force me to wait until the last minute lest the card get shuffled, we check out a Lightweight finisher and a butter-smooth Flyweight submission ace.

Green — who went undefeated (6-0) as an amateur before going professional in 2016 — enters the Octagon on a six-fight win streak that features a first-round knockout of future “Contender Series” competitor Leon Shahbazyan. He last fought in 2018, knocking out Richard LeRoy to claim the CXF 160-pound championship.

He steps in for the injured Kevin Holland on four days’ notice.

The 5’10” Green employs a rather idiosyncratic striking style. Though he constantly switches stances, he only really seems comfortable boxing orthodox, where he sports a decent jab and a powerful right cross. When he kicks, it’s often slow and from too close, leaving him vulnerable to takedowns and counter strikes; in fact, this is made worse by his upright stance and tendency to not move his head. That said, he does have solid power and a knack for landing heavy elbows inside.

His wrestling and ground game are similarly odd. He’s got an excellent, well-timed level change, but an inability to properly drive through after getting in on his opponent’s hips makes it difficult for him to complete takedowns. When he ends up on his back, which is worryingly often due to the aforementioned kicking issue, he’s surprisingly easy to mount, and once there, he always goes for the same knee reap to 50/50 transition to either threaten a leglock or try and stand. I honestly wouldn’t be surprised if he intentionally lets himself get mounted to set up that escape; he did it four times in his last two fights.

While Green does have submission chops and stopping power, it looks as though the rest of his game is too underdeveloped to make use of them against top-notch opposition. He could be a threat with a bit of seasoning, but don’t expect to ever see a number beside his name.

Opponent: Green squares off with Daniel Rodriguez, who looks like a nightmare match up. Green’s lack of head movement leaves him vulnerable to Rodriguez’s destructive overhand left, his poor takedown defense gives Rodriguez an out if things go wrong on the feet, and his lack of size limits his ability to turn the fight around with one shot. Unless Rodriguez makes a grievous mistake on the ground, this should be a knockout victory for “D-Rod.”

Royval assembled a 6-2 record during his time in LFA, the losses coming to future “Contender Series” competitor Nick Urso and current UFC standout Casey Kenney. His last two fights have seen him dispatch Joby Sanchez and Nate Williams in a combined 3:40 and earn the LFA Flyweight belt against the latter.

As a submission specialist, Royval strikes like someone unafraid to be taken down. A loose, flowing southpaw, he enjoys keeping his hands low, firing in combination, angling off after stepping in with a lead left, and throwing low kicks. He’s more than happy to get wild, too; he regularly spins and opened the Williams fight with a knee-to-enzuigiri combination. Unfortunately, his striking defense is similarly lackadaisical. His head movement isn’t good enough to make his hands-low style work, and he shares Gabriel Green’s problem of throwing low kicks from too close. The aforementioned Kenney managed to repeatedly tag him by staying patient and throwing crosses down the pipe, an effort plenty of other Flyweights could replicate.

Once he does provoke a takedown, though, it’s a whole different ballgame. Royval is a monster off of his back, boasting a gnarly triangle-armbar-omoplata series that was on full display against Williams. He is always on the attack, never content to settle for a bad position on the mat, and showed quality submission defense when Kenney threatened his neck.

That Kenney fight amply showcased the weakness of his style, though. Intentional or no, his takedown defense is so poor that a technical wrestler with good awareness can take him down directly into an unfavorable position and bypass that nasty guard entirely. Kenney brought him down at will, too, even when it was clear that Royval couldn’t win the fight from his back.

We’re reaching a sort of submission equilibrium in mixed martial arts (MMA), where the base level of grappling is so high that only freaks like Brian Ortega can rely on winning from their backs. Still, Royval has the skills to catch practically any 125-pound fighter who’s not on the ball, and I can see him racking up a good number of post-fight bonuses even if he never breaks the Top 10.

Opponent: “Raw Dawg” squares off with Tim Elliott in my pick for “Fight of the Night.” Elliott is more than happy to engage on the ground and is a scrambling fiend in his own right, meaning we’re likely to see some terrific exchanges on the mat. Though Royval has the submission skills to catch Elliott the way Ben Nguyen, Deiveson Figueiredo, and others have, Elliott’s wrestling and physical dominance mean Royval needs the tapout to win. I’ve got Elliott by a hair.

Remember that MMAmania.com will deliver LIVE round-by-round, blow-by-blow coverage of the entire UFC on ESPN 9 fight card this weekend right HERE, starting with the ESPN/ESPN+ “Prelims” that are scheduled to begin at 6 p.m. ET, then remaining main card portion that will air on ESPN/ESPN+ proper at 9 p.m. ET.

To check out the latest and greatest UFC on ESPN 9: “Woodley vs. Burns” news and notes be sure to hit up our comprehensive event archive right here. 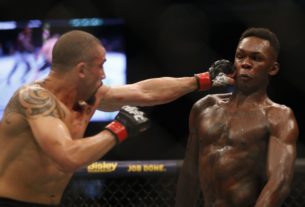