ABU DHABI – Despite his displeasure with UFC 251 judges, UFC president Dana White confirmed there will be no personnel changes for the three remaining “Fight Island” events this month.

This past weekend, featherweight champion Alexander Volkanovski escaped with a narrow split decision win in his rematch with Max Holloway, with a large portion of fans ad media expressing disagreement with the result. According to MMADecisions.com, 65 percent of polled fans thought Holloway won.

Following the UFC on ESPN 13 weigh-ins Friday, White was asked whether or not the promotion would make any changes. Unlike state-sanctioned events in the U.S., the UFC is self-governed when it comes to certain international events, including those held on Yas Island, Abu Dhabi.

“No, whatever we had planned for here is planned,” White said. “No matter who you bring in or what you do, there’s always a possibility of bad decisions. Did you guys see today that FanDuel, if you bet with FanDuel, they gave you your money back on Max Holloway? Yeah, it’s pretty crazy. That there goes to show you.”

Following Volkanovski’s win over Holloway, White voiced his displeasure with the judges’ decision. White said the promotion would have to “figure it out.”

“Listen, man, you can’t leave it to these guys,” he told reporters backstage at Flash Forum. “We’ve got some bad judging. …

“I dunno. Did anybody in here score it for Volkanovski? Nobody in the media? I don’t know. We’ll have to figure it out.”

UFC on ESPN 13 takes place Wednesday on Yas Island, Abu Dhabi. The event airs on ESPN and streams on ESPN+. 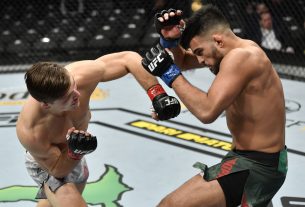