Overeem vs Sakai In The Works For Sept. 5

An interesting Heavyweight showdown is in the works to headline an upcoming UFC event on September 5, as ESPN is reporting that Ultimate Fighting Championship (UFC) is looking to book a bout between Alistair Overeem and Augusto Sakai.

While the location has yet to-be-determined, it’s a safe bet that the UFC APEX facility in Las Vegas, Nevada could play host. That’s assuming other states and countries haven’t made progress with allowing mass gatherings.

Plus, there is always “Fight Island.”

Overeem is coming off a second round knockout win over Walt Harris at UFC on ESPN 8 last May (see it again here). Had it not been for a last-second Hail Mary knockout loss to Jairzinho Rozenstruik last December, “The Reem” would be on a four-fight win streak and knocking on the door of another title shot. Nevertheless, the hard-hitting big man hopes to get some momentum going by taking out Sakai.

Augusto, however, has been on a tear since making his UFC debut in late September of 2019, winning four straight fights, bringing his record to 15-1-1, 4-0 under the UFC umbrella. Getting his start on the “Contender Series,” Sakai has proven to be a great addition to the 265-pound weight class.

A win over “The Reem” would be the biggest one to date for the Brazilian big man, who excelled under the Bellator MMA umbrella to the tune of going 4-1-1. On the flip side, a victory for Overeem puts him in a great position to make one last run at the UFC title before he hangs up his gloves for good. 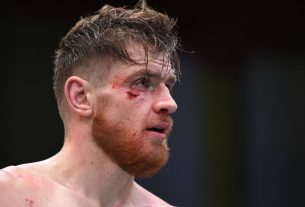 What’s Next For Edmen Shahbazyan?