EA Sports recently released the gameplay trailer for UFC 4, which arrives on PlayStation 4 and Xbox ONE on Aug. 14. If you’re planning to hold out for next-gen versions of the MMA fighting game; don’t bother, because EA has no immediate plans to release copies for the upcoming PlayStation 5 or Xbox Series X.

UFC 4 will introduce new venues, including backyard brawls and Kumite arenas for those fight fans channeling Kimbo Slice or Frank Dux. In addition, a bevy of gameplay enhancements are expected to elevate the user experience.

Those include fluid clinch control, takedown overhaul, and devastating ground-and-pound.

That all sounds great, but a majority of fans on YouTube remain unimpressed, with some even promising to cancel their existing pre-orders. Others were disappointed with the “ugly mechanics,” “downgraded graphics,” and “old player models.”

Personally, I’ll probably reserve judgment until I can get my hands on a copy and actually play a few rounds. For those of you with a similar plan, pre-order the game right here to get advanced exclusives like Anthony Joshua and Tyson Fury. 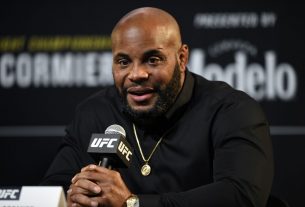 Joanna Jedrzejczyk demands apology from Colby Covington: ‘Bow down to the Queen and say sorry’