Despite the ear-to-ear smiles and close physical proximity, Colby Covington is still not cool with Ali Abdelaziz.

The former UFC interim welterweight title challenger clarified Wednesday why he took a group photo with President Donald Trump alongside Dominance MMA manager Abdelaziz – a man with whom he once scuffled at a buffet line in Las Vegas.

Abdelaziz represents Kamaru Usman – UFC welterweight champion and one of Covington’s many enemies in the sport.

“Yeah, right – I did not call truce with Ali Abdelaziz,” Covington told MMA Junkie on Wednesday. “That picture was specifically for Dana (White).

“He wanted a picture with the UFC guys, and I did it for Dana. I’m thankful for Dana for keeping sports in the world right now and moving the show on with so much going on. He’s giving the opportunity for fighters to keep putting food on the plates for themselves, and (Abdelaziz) is a dirt bag still. He’s an informant, that little rat. So I will never be friends with him.”

Tyron Woodley: Jorge Masvidal ‘a blessing’ in prep for Colby Covington, but no mind game

The photo with Trump was taken Sunday at a campaign rally in Las Vegas. Trump is a personal friend of UFC president Dana White, who spoke on Trump’s behalf at last month’s Republican National Convention and donated to Trump’s reelection campaign.

Covington returns to the octagon this weekend in the main event of UFC on ESPN+36 against former champion Tyron Woodley. 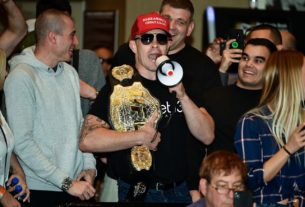