ABU DHABI – James Krause believes the world is getting a false perception of who Joaquin Buckley really is after his viral UFC knockout.

Following Krause’s (28-8 MMA, 9-4 UFC) unanimous decision win over Claudio Silva on Saturday at UFC on ESPN+ 38, which took place at Flash Forum at Yas Island, he was asked about Buckley.

Krause said Buckley (10-3 MMA, 0-1 UFC), who became a global sensation after his one-legged back kick knockout of Impa Kasanganay a week ago, attempted to train with him over the summer. The fallout of that apparently created some hard feelings.

“The dude’s a clown, man,” Krause told reporters, including MMA Junkie, post-fight at UFC on ESPN+ 38. “Listen, this dude – people just know him from his viral video, for his viral knockout. (It was a) beautiful knockout. I’m not going to rag on that. The dude’s a (expletive)box. He’s from my neck of the woods and all he does is sit on social media and talk (expletive) all day. He called me to come train and I told him to get (expletive). I don’t want that type of culture in my gym, I don’t need that type of culture. No. He took offense to it, and it is what it is. And he can get it, too.”

It’s tough for Dan Hardy to call Joaquin Buckley’s KO the UFC’s greatest, but ‘it’s certainly up there’

Krause took the fight with Silva on just 12 days’ notice, but managed to end the Brazilian’s perfect start under the UFC banner. Krause is now on a five-fight winning streak in the welterweight division, but has made it well known he’s balancing his fighting career with coaching.

Although he would like a natural progression up the 170-pound pecking order, Krause is willing to go out of his lane to settle the beef with Buckley next. If the UFC offered it, he said he would be more than willing to make another temporary trip to middleweight. 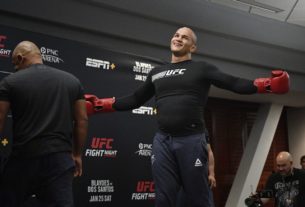