The UFC round robin continued on Saturday after Kevin Holland tested positive for COVID-19.

The dominoes began falling on Friday when Curtis Blaydes tested positive for COVID-19. That nixed his UFC Vegas 15 headlining heavyweight bout opposite Derrick Lewis on Saturday.

The second domino fell on Saturday when Kevin Holland, who was set to headline UFC Vegas 16 next week, also tested positive for COVID-19. He was quickly replaced by Marvin Vettori, who steps into the UFC Vegas 16 main event opposite Jack Hermansson.

By the time the UFC was ready to confirm that Vettori had stepped in for Holland, they already had Holland rebooked.

In what becomes a swap of middleweight opponents, Holland has already agreed to face Vettori’s UFC 256 opponent Ronaldo “Jacare” Souza at the Dec. 12 pay-per-view event.

That’s a fairly quick turnaround after having just tested positive for COVID-19. The assumption would be that Holland is asymptomatic and otherwise healthy. If that is so, he should have just enough time to try and get clear of COVID-19, but of course he will have to undergo multiple tests again prior to stepping into the Octagon with Jacare.

In order to beat Cris Cyborg, Arlene Blencowe aims to ‘put some fear in her’ at Bellator 249

Kamaru Usman takes jab at Conor McGregor: ‘I really don’t understand why you all want this man dead’ 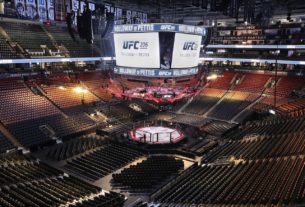