Skip to content
Carlos Condit enters UFC on ABC 1 on final fight of contract: ‘A lot riding on this fight’

ABU DHABI – Carlos Condit’s contract with the UFC is coming to an end this weekend.

The former UFC interim welterweight champion revealed Wednesday that he’s got one fight left on his deal – this Saturday’s co-main event showdown against fellow veteran Matt Brown at UFC on ABC 1.

Approaching the final fight on his contract, Condit knows there’s a lot at stake.

“I have my mind supremely focused on this fight getting this thing handled,” Condit told reporters at UFC on ABC 1 media day. “There’s a lot riding on this fight – a lot of guys getting cut, a lot of people on the chopping block.

“To mention the losing streak, I’ve won one of my last six, so it’s not a great record for my last contract. I’m up for renegotiation, too, so a lot going on in this respect.”

Condit (31-13 MMA, 8-9 UFC) is unsure of what will go down beyond Saturday whether he wins or loses against Brown (22-17 MMA, 15-11 UFC). Condit hasn’t “thought that far ahead” and plans to take one step at a time. Condit is coming off a decision win over Court McGee at UFC on ESPN 16 back in October. The victory snapped a five-fight losing streak

Although many things feel uncertain for the 36-year-old, there’s one thing he knows.

“I want to finish Matt Brown,” Condit said. “It doesn’t matter (how). I’m going to (expletive) up Matt Brown.”

How to watch UFC on ABC 1: Fight card, start time, results, where to stream Holloway vs. Kattar


Carlos Condit enters UFC on ABC 1 on final fight of contract: ‘A lot riding on this fight’ 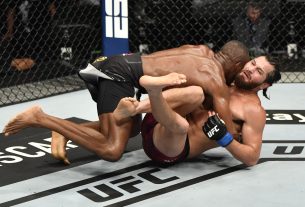