Back in January of 2019, TJ Dillashaw walked into the cage opposite Henry Cejudo with confidence, intent on building upon his legacy as a double-champ. Instead, Cejudo knocked him out in just 32 seconds. Before Dillashaw could spend too much time protesting the stoppage, he was popped by USADA for intentional use of EPO, costing him his Bantamweight title and sitting him on the sidelines for two full years.

Now, Dillashaw is free to return to action, and there’s a good deal of speculation regarding potential opponents. Corey Sandhagen has been targeting the former champion, but Dillashaw has mostly focused on trying to score an immediate title shot.

Speaking with Mike Swick on the Real Quick podcast, Dillashaw also expressed interest in rematching Cejudo, who remains in an odd state of semi-retirement.

“I haven’t thought about a hit list exactly right, but yeah, he’s (Henry Cejudo) on it,” Dillashaw said (transcription via LowKickMMA). “Just you saying his name it’s like, ‘Oh god,’ you know? ‘The King of Cringe’ did a good job of being cringy. It’s one of those fights that I was so much better going into that fight — don’t take anything away from him [though].

All in all, it doesn’t seem like Dillashaw has fully accepted the loss event regardless of his time away. “The way that his (Cejudo’s) career worked out and the way that he stepped away from it was just like, he got so lucky,” Dillashaw concluded. “So that’s a fight that I want back because I don’t think he’s as good as he thinks he is, so that’s for sure on my hit list.”

Anthony Hernandez scored one of the most unlikely submissions of all time, but the UFC’s camera crew still did him dirty.

If Amanda Nunes defends against Meegan Anderson, will there still be a women’s Featherweight division?

“I will finish her.”

Jon Jones passes on some knowledge:

Light Heavyweight is heating up, as Da Un Jung faces off with undefeated Shamil Gamzatov.

The physical evolution of Dana White over the years is truly groundbreaking science.

#OnThisDay in 2001: The Ferttita’s and @DanaWhite took charge of the UFC… and the rest is history!

Watch all over again on @UFCFightPass pic.twitter.com/MHM9yGDtql

It was a decidedly rough weekend for Curtis Blaydes — some of y’all “fans” need different hobbies!

So someone found Curtis Blaydes number just to troll him, this shit is disgusting pic.twitter.com/KOYZR2A6af

Can you solve this UFC riddle?

Is it too late for Andrey Koreshkov to join UFC’s Welterweight division? He’s been real good for a long time.

“The Strangler” Shamil Tsakuev (3-1) has a good SoS, one to keep an eye on. Puts his opponent to sleep in the Rd 1 triangle choke. pic.twitter.com/Nk0TWrRfnG

Calf slicers in MMA are gutsy, and I love it. 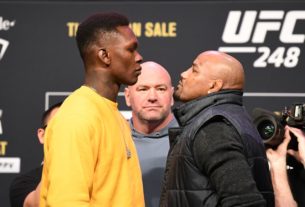 Up Next! Championship Doubleheader In Vegas!