It did not take long at all for Gane to stand out from the Heavyweight pack. Debuting inside the Octagon at just 3-0, Gane quickly demonstrated a mix of skill that seemed to imply a decade of experience. However, the Frenchman was actual a relative newcomer to mixed martial arts (MMA), and while it’s a bit early to whip out the term prodigy, “Bon Gamin” is definitely a fast learner. Rozenstruik, however, is his biggest test yet. “Bigi Boy” has many, many years of experience on his foe, and unlike Junior dos Santos, his best days are not behind him. Is it too much, too soon for the talented prospect?

Let’s take a closer look at his skill set and try to find out:

Gane does not move like most Heavyweights. Though he’s primarily a Southpaw, Gane is quite happy to switch stances to change up angles, and he’s more focused on landing hard kicks than chasing the knockout punch.

There are a lot of interesting tricks in Gane’s kicking game. For one, his left leg in general is excellent. Gane does a very nice job of showing his opponent his left knee before chopping the kick, which can prove a difficult bit of misdirection. If the knee goes high, the shin could easily follow for a high kick, but Gane also has the dexterity to then bite into the thigh instead. By constantly switching between the leg, body, and head kick and giving his opponent the same look for all three, Gane really muddies the waters.

Gane demonstrated many kick setups against dos Santos, really flustering the boxer. Often, he would simply flash a big hand movement before ripping the left kick. Other times, he would double jab or feint to gain an outside angle, then dig his low kick across the front of the thigh.

Left leg dexterity aside, Gane also made smart use of his lead leg. I don’t know if Gane trained Savate — a French-style of kickboxing that emphasizes toe kicks into the liver — or if French Muay Thai is just influenced by that martial art, but Gane definitely has a habit of stabbing his toes into his opponent’s mid-section. Gane will throw his toe stab kick straight up the middle or show his lead knee to feint an outside low kick then whip the toes to the stomach.

Gane’s boxing is less developed than his kicking game, and it seems to vary a bit fight-to-fight. In his early UFC bout vs. Don’Tale Mayes, for example, Gane was stepping into the pocket with wide swings, really trying to take his foe’s head off. He did show some interesting looks that involved feinting kicks, changing stances, then swinging a big hook, but the focus was definitely on power punching.

Against a more dangerous striker in “JDS,” Gane was less willing to exchange. Instead, his hands served more as a distraction to set up the kicks. He would flash a jab at the hands to land a kick, or show a big swing just to get dos Santos backing up. Still, when Gane did really sit down on a jab in the second, it began the finishing sequence, so there’s definitely power in his hands.

The final element of Gane’s kickboxing is his close-range striking. Not every athlete advertised as a Muay Thai representative is actually any good at clinch work, but Gane makes great use of his elbow strikes. This elbows largely land as the result of good fundamentals, as Gane uses sound head position and good forearm frames to jam his opponent back into the fence before unleashing. In the case of his dos Santos’ knockout, the Brazilian was so turned away from Gane that he probably could have chased the back, but the elbow landed perfectly as a result (.GIF).

Aside from body positioning, Gane also likes to set up his elbows by folding over the top of the hands. Whenever Gane pursues his foes against the cage, he’s likely to reach and try to parry down a wrist and turn that strike into an elbow. Otherwise, the French striker makes use of the classic strategy of slamming home a knee then turning over the elbow as his opponent’s hands drop to guard from the next knee.

For a man whose boxing skills are the least proven aspect of his stand up game, Gane has shown consistently good head movement. That’s not to say he’s perfect — dos Santos did land that overhand on several occasions — but Gane does a better job of slipping his head off the center line and rolling beneath big punches than most big men. Part of that can be credited to his distance, as Gane largely operates from a further distance, allowing him more time to react to lunging shots.

Gane’s wrestling is not yet a proven skill, but so far, he’s shown a lot of potential, and it appears his ability to learn quickly is not limited to kickboxing.

All of Gane’s takedowns scored thus far inside the Octagon came in his first two UFC fights, and they mostly happened from the clinch. As it turns out, fundamentals of clinch positioning like head position and frames carry over quite easily to wrestling. Against Mayes, for example, Gane scored a couple takedowns merely by circling to his underhook side as he landed strikes, giving him such a strong position that he was able to force his foe down (GIF).

Against Raphael Pessoa, Gane gained top position by countering a takedown attempt from the big Brazilian. Pessoa attempted an overhook throw and nearly had it, but on his way down, Gane scored a fairly desperate foot sweep of his own to reverse the attempt (GIF). Again, that’s a real example of athleticism and instinct more than planned counter, because Pessoa had nearly completed the takedown before getting toppled.

It’s hard to read too much into Gane’s grappling, but so far, he’s shown a very submission over position approach.

In his debut, Gane’s foot sweep counter landed him in side control opposite Pessoa. Almost immediately, Pessoa turned away and gave up the arm triangle choke (.GIF). More initiative was required against Mayes, but Gane dropped back on the heel hook attempt in the final seconds of the fight. Watch the following .GIF and keep an eye on Mayes’ lack of defense/movement of any kind — it does take a bit of the shine off a neat submission.

So, while both techniques were executed well-enough and aggression is encouraging … it doesn’t tell us much.

Gane is a well-rounded and hugely talented up-and-coming Heavyweight talent who has thus far cruised through all his opponents. If he does so against a decorated kickboxer in Rozenstruik, he’s going to break into the title mix and find himself in a No. 1 contender elimination bout next.

Remember that MMAmania.com will deliver LIVE round-by-round, blow-by-blow coverage of the entire UFC Vegas 20 fight card this weekend right here, starting with the ESPN+ “Prelims” matches, which are scheduled to begin at 5 p.m. ET, then the remaining main card balance on ESPN+ at 8 p.m. ET.

To check out the latest and greatest UFC Vegas 20: “Rozenstruik vs. Gane” news and notes be sure to hit up our comprehensive event archive right here. 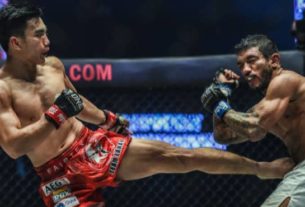