LAS VEGAS – It appears Tyron Woodley’s UFC career may be over after his loss to Vicente Luque at UFC 260.

Woodley (19-7-1 MMA, 9-6-1 UFC), a former UFC welterweight champion, dropped a fourth consecutive fight on Saturday’s card at the UFC Apex in Las Vegas. Luque (20-7-1 MMA, 13-3 UFC) hurt him with strikes, then handed “The Chosen One” his first career submission defeat in the co-headliner, and it all happened inside the first round.

Despite the fact it was a thrilling affair that snagged “Fight of the Night” honors, the result wasn’t a good one for Woodley – especially because it was the final fight of his current UFC contract.

UFC president Dana White was asked about Woodley’s future with the company by MMA Junkie at the UFC 260 post-fight news conference, and he didn’t give a promising response.

Coming into the matchup with Luque, there were questions about whether Woodley had lost several steps in his game, or if he’d simply been beaten by the three most elite fighters in the division.

Woodley’s losing skid prior to UFC 260 saw him drop his title to Kamaru Usman, lose a decision to Gilbert Burns and succumb to a late injury TKO against rival Colby Covington. The matchup with Luque was, on paper, a step down in competition.

Woodley lived up to his pre-fight promises of being more aggressive, and he did manage to hurt Luque at one point early in the fight. He couldn’t withstand the damage that came back from a young, dangerous opponent, though, and it led to his demise.

Although it might’ve been the last time Woodley stepped in the UFC’s cage, White praised the former champion for his effort.

“Woodley, who takes a lot of criticism – that kid came to fight tonight,” White said. “He went out on his shield tonight. He came in to fight.” 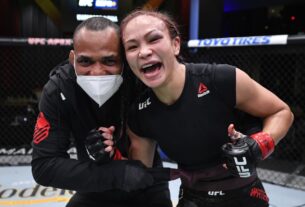 How To Watch ‘Rodriguez Vs. Waterson’ Tonight On ESPN! 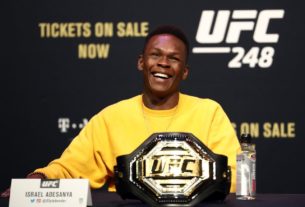 Adesanya: Jones Fight Will Go Down At Raiders Stadium, July 2021