Stipe Miocic suffered a nasty knockout loss to Francis Ngannou in the main event of UFC 260, but fortunately it looks like he’s ‘alright.’

Stipe Miocic is a hell of a fighter and one of the toughest guys to ever step into the UFC Octagon. He proved that yet again on Saturday night at UFC 260 against Francis Ngannou. While he ended up losing in the second round via devastating KO, Miocic survived some hellacious blows in the first round of their fight and never stopped coming forward.

For a man who rarely seemed to get his due from fans or the organization he fought for, he was one hell of a heavyweight champion.

Being the awesome dude that he is inside the cage and out, it was hard to watch Ngannou body him so hard in their long awaited rematch. Not only did “The Predator” drop Miocic with a big counter right during a wild exchange, he unloaded one more big hammerfist directly on Stipe’s jaw before Herb Dean could sprint across the cage to stop the fight.

Videos of him laying senseless on the canvas were everywhere too (including our MMA Mania twitter page, obligatory smash that follow button request).

Damn, Stipe Miocic laid out on the canvas after that brutal 2nd round KO #UFC260 pic.twitter.com/bIXri142w1

So how’s Stipe doing? He okay?

The photo showed the two still at the hospital after the fight, but no word yet on whether Miocic’s knee is okay after that final fall that saw his leg twisted badly under his unconscious body. Whether Miocic’s leg is injured could play a big part in whether he’s able to get back in the cage for an immediate rubber match against Ngannou … or not, considering everyone at the press conference was already moving on to either Jon Jones or Derrick Lewis as Ngannou’s next opponent.

His time as champion may be over for now but he can look back on his reign with Pride. pic.twitter.com/YIHZyApnYm

It’s just more casual disrespect shown to the greatest heavyweight champ in UFC history, something even Stipe’s wife Ryan Marie has pointed out in the past. But in this house we respect Stipe Miocic and look forward to his return. He has nothing left to prove, but if he feels like continuing to fight, we have no doubt he’ll be facing off for championship gold again in the near future. 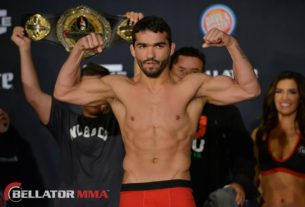 Patricio Pitbull vs. Daniel Straus revisited — chapter one of a four part quadrilogy